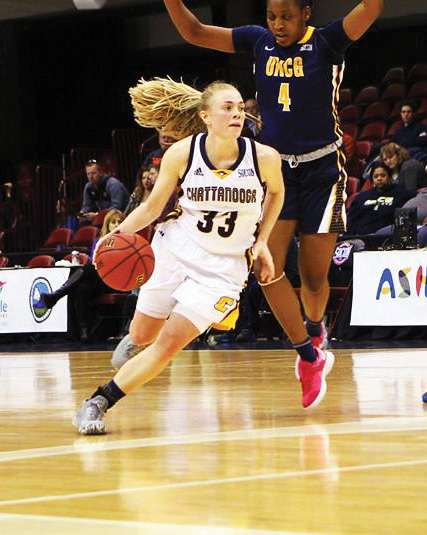 LOUISVILLE, Ky. — The University of Tennessee at Chattanooga women’s basketball team fell short in an 82-62 loss at Louisville in the first round of the NCAA Women’s Basketball Championship at the KFC Yum! Center.

The Mocs got out to an 8-5 lead behind five points from junior Keiana Gilbert (Pulaski, Tenn.) who scored her 1,000th point in the loss. She had the Mocs first five of the game and freshman Lakelyn Bouldin (Spencer, Tenn.) followed with a 3-pointer of her own to break a 5-5 tie for the Mocs’ second and last lead of the game.

Louisville’s Jazmine Jones hit a layup, setting off a 15-0 run by the Cardinals, making it 20-8 with 1:09 to play in the opening stanza.

Chattanooga senior Queen Alford (Decatur, Ga.) made her first appearance in the game and hit back-to-back 3-pointers to cut that lead to 20-14 as the quarter ended.

Louisville stretched out its lead to 27-16 less than three minutes into the second quarter, but the Mocs fought back, outscoring the Cards 12-5 over the next 4:24 to make it 32-28. That’s as close as it would get the remainder of the way. Louisville closed out the half on a 6-0 run to lead 40-30 at intermission.

In the third quarter, Chattanooga edged Louisville 19-18 led by nine points from junior Chelsey Shumpert who was 3-of-5 from range. The Mocs shot 42.9 percent in the third quarter, cutting the lead to 58-49 at the end of three. UTC matched the Cardinals 7-7 on the boards in the frame.

With just under three minutes to play in the game, head coach Jim Foster put his four seniors in for their finale.

Louisville outscored UTC 46-16 in the paint and 22-13 off turnovers, forcing the Mocs into 15 miscues. Chattanooga led 10-4 on second chance points with 12 offensive rebounds but Louisville outrebounded the Mocs 34-29.

Bouldin led the Mocs with 16 points and was 3-of-8 from the 3-point line. She has 64 3-pointers on the year and moved to 10th on the Mocs single-season list. Alford had 15 points and was 3-of-4 from the line. Also in double figures was junior Chelsey Shumpert (Paducah, Ky.). She had six assists and added three 3-pointers of her own. Senior Jasmine Joyner (Southaven, Miss.) closed out her career with 11 points and seven boards while playing all 40 minutes. She is 14th all-time at UTC for scoring, third for rebounding and ranks eighth all-time in the NCAA with 436 blocked shots. She is first at both UTC and the Southern Conference in that category.

Louisville shot 36-of-59 on the day and was 7-of-12 from beyond the arc. Durr led all scorers with 27 points. Myisha Hines-Allen added 16 points and 12 rebounds with five assists. Jazmine Jones came off the bench for 14 points and Kylee Shook added 10 of her own with four rebounds. Mariya Moore had a game-high 10 assists.

Chattanooga closes the season at 21-11 and Louisville improves to 28-7 overall and will advance to play the winner of the Tennessee/Dayton game on Monday in the second round.