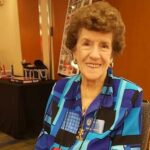 On Aug. 9, 2019, surrounded by family at home, Muriel Ann Holmelin Whitman went home to be with Jesus. She and her husband moved from their home, in St. Petersburg, Florida, to Sparta, Tennessee, in May 2019, to live with their daughter, Barbara, and her husband, Chuck.

Muriel was born in New York City, on Dec. 13, 1925, and, at the age of 5 weeks, she and her family returned to the Panama Canal Zone. In 1943, when she was 17 years old, she went to work for the U.S. Navy. One of the fondest memories was catching a ride on the USS Enterprise as it transited the Panama Canal. She lived and worked, in Panama, until the age of 28, when she and her family moved to Florida.

Upon returning to Florida, Muriel met and married her husband 62 years, John Whitman. Muriel sold Tupperware, in the 70’s and 80’s, and rose to the position of district manager. She was president of the American Business Women’s Association and was honored with their Woman of the Year Award. Her other accomplishments include president of the Panama Canal Society and president of the Kenneth City Homeowners Association. In her 70’s, she dabbled in local politics and was eventually elected to serve as a Kenneth City council member. At the age of 80, she ran for mayor of Kenneth City, Florida, and won.

John and Muriel traveled extensively, often returning to Panama. Throughout her life, Muriel held many roles. And, though she often “wore many hats,” Muriel always regarded her most important roles as that of wife and mother (to her three children). She was, admittedly, a people person, and she loved to help others.

She is preceded in death by her parents, Gus and Pauline Holmelin; her brother, Gus; her sister, Jean; and her son, William Arnold Sr.

A celebration of life will be held at a later date.