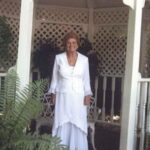 A private family graveside service will be Aug. 10, 2019, at Spring Hill Cemetery.