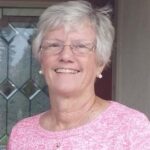 Mrs. Ruttledge was born Sept. 8, 1945, in Portland, Oregon, to Oran and Virginia Denhard. She was the oldest of five children.

She graduated from Sandy Hugh School and continued to earn a degree at Oregon Health and Science University. During her 46-year career in health care, she specialized in X-ray and mammography, eventually retiring from a supervisory position, in 2011.

In December 1984, Pam married Dwight Ruttledge (USAF). Dwight and Pam, along with their beloved family, were then stationed in    Germany where she worked in a NATO hospital. After Dwight retired from the military, in 1989, the family relocated to Satellite Beach, Florida, where Pam worked at Holmes Regional Hospital.

Throughout her life, Pam’s passion was creating. She became an    exceptional quilter and painter. She also loved kayaking the Florida waters and traveling. While vacationing in Hawaii, Pam “conquered her fear” by parasailing for the very first time and looked forward to doing it again.

In December 2018, the Ruttledges moved from Florida to Sparta, Tennessee, where they enjoyed lots of extended family.

In addition to her parents, she was preceded in death by her sister, Gretchen Denhart, in 2000.

In lieu of flowers the family wishes donations to be made to American Cancer Society.