Pastor says he is “angry” about treatment of officials 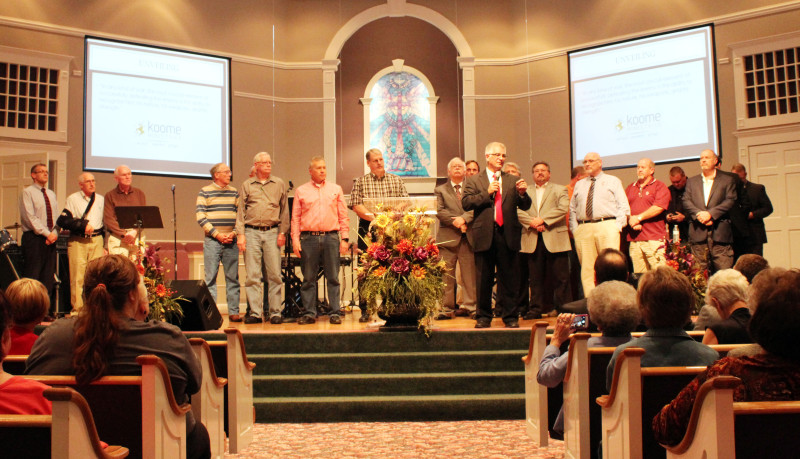 Rousing opening remarks by a White County pastor at a meeting hosted by Citizens Against Islamic Indoctrination on Tuesday directly addressed a recent chain of events that he said is an actual form of terrorism by specific individuals and should not be tolerated.

Steve Gerhart, pastor of North Sparta Church of God, opened the Nov. 3 event with prayer and few straightforward words to the audience of approximately 500 people. The meeting is one of several that has been held to provide residents an outlet for expressing their views about removing a specific textbook from White County’s seventh grade classrooms. Opponents say the book is biased and promotes Islam.

However, Gerhart told the crowd that the behavior of some individuals has exceeded proper conduct.

“We are in the middle of a very emotional issue,” he said. “There are aspects of any emotional issue that are going to anger each one of us. I want to confess. There’s one particular aspect of the issue here in White County that has angered me.

“It’s not the agenda of the Islamics. We know what their agenda is. It concerns me and grieves me, but that’s not what angers me.

Several members of the audience responded with “yes” as they agreed with Gerhart’s statement.

“Don’t let that anger override your love,” said Gerhart. “There are those who have hidden – much like terrorists’ do – behind the secrecy of the Internet. There are even those that have hidden in the guise of Christianity, and they have done some things very hurtful. There have been some very vulgar messages sent to some teachers and officials of our school.” Gerhart said if was time to make a bold statement about the tactics that he had mentioned.

“There is a right way and a wrong way, there’s a legal way and there’s an illegal way,” he said. “And terrorism is illegal.”

At this point, Gerhart asked every pastor in the audience to come to the stage “as a show of renouncing” the negative actions of those he had mentioned in his previous statements.

Anthony Wright, co-chairman of CAII, then approached the podium.

“But here is what it is about. It’s about 55 places in this book mentioning Islam and Muslim and only five to 10 mentioning Christianity.”

Wright talked about the school board meeting several months ago where, according to him, about 300 individuals were present. He also said there are other textbooks to replace the one that is now in use.

“There was a letter that our attorney sent them stating where they [the school board] broke the law,” said Wright.

According to Wright, the school board has violated over 14 policies and procedures. However, this statement could not be verified as of press time.

Wright said CAII’s attorney, James Omer, drafted a letter “demanding” the school board respond in 10 days and for them to obey their policies and procedures, as well as state laws.

“Guess what they did?” said Wright. “They broke the law again. They went and had a private meeting – hired an attorney, paid mine and your tax dollars – used those to pay the attorney. And, not one time did they ask any of the citizens. They broke the law again. They call the meeting. They come out. They say, “Here’s who we’re going to hire.” And they did it. That’s breaking the law again. You can’t have private meetings behind closed doors when you’re elected public officials.”

However, the statement made by Wright was inaccurate. White County Board of Education advertised a special called meeting under the public notices section of The Expositor, on Thursday, Oct. 22, 2015. The meeting was to be held Friday, Oct. 23, 2015, at the board of education building, which was the meeting in which the attorney was hired. The Expositor was in attendance and reported about the meeting in the Monday, Oct. 26, 2015, edition.

In addition, Wright presented a document he said was delivered to Sandra Crouch, director White County schools, on Nov. 3, 2015, which was a request for copies of school board records.

The document stated the following:

Pursuant to the Tennessee Open Records Act, Tennessee Code Annotated §10-7-503 et seq., we are requesting to inspect or obtain copies of public records that refer, relate to or any way reference, the Pearson 7th Grade Social Studies textbook currently in use in the White County School system which were generated or received from January 1, 2013, until the present date. This request includes any and all emails, texts, notes, letters or other documents in any form or from whatever source derived, including those communications to and from the personal phones and other electronic devices used by the members of the school board for the communication of any information related to the selection of this particular textbook, the decision to retain it, and the current discussions regarding whether or not to discontinue its use.

This request also includes any communications of any kind with respect to the decision to hire legal counsel to represent the Board in connection with the failure to follow the specific policies and procedures of White County and the laws of the State of Tennessee regarding the operation of schools in White County. The requested information should include the means by which the legal counsel was identified, the fees and expenses to be charged, any prospective budget for the representation, other legal counsel who were considered, and any communications by and between school board members regarding the legal representation and terms of such representation prior to the public meeting in which he was hired, including any contract entered into with the legal counsel on behalf of White County.

You are also instructed not to destroy, erase, delete nor secrete any communications or documents which are covered by this request, including those stored or received on your personal mobile devices or home computers, and any attempt to do so may be considered obstruction or violation of other laws governing public records in Tennessee.

We further request a waiver of all fees for copying and producing such records due to the fact that the disclosure of the requested information is in the public interest and will contribute significantly to the public’s understanding of the issues involving the dispute over the Pearson 7th Grade Textbook currently being used in White County.

The request was signed by Chris Sapp, of Sparta.

According to a press release provided by Steve Gill, Saleem was raised as a Sunni Muslim, in Beirut, Lebanon, and recruited to the Muslim brotherhood before finding Jesus and becoming an evangelist for Christ.

“Hundreds of Muslims are converting to Christianity each day all over the world,” said Saleem. “They are drawn to a loving God and converting by choosing love rather than the hate and murder that is Islam. As Christians we should engage them in love, and draw them to Jesus.”

Saleem also noted that understanding the truth about Islam and offering Muslims the truth about Christianity is the key to defeating the evil that those who represent the worst Islam have to offer.

Several White County pastors signed a letter calling for the removal of the textbook from White County schools.

Wright said more than 1,370 White County residents have signed petitions calling for the resignation of the entire White County School Board because of their refusal to remove the seventh grade Pearson textbook from classrooms.

However, removing the school board members may not be a simple process.

The Expositor presented a list of questions to Dorcas Marcum, White County administrator of elections, who conferred with state election officials to ensure the accuracy of her answers.

These are the questions and answers.

•Can these signed petitions be used to oust school board members? If so, are they required to be registered voters or can it be any White County resident?

No, the petitions cannot be used to request that a referendum be held to oust the school board members.

White County’s form of government does not allow for a referendum of this nature nor does the Tennessee Constitution or Tennessee Code Annotated.

T.C.A. 8-47-101 addresses how ouster suits are to be pursued. Particular grounds apply and a court of law would have to find a reason for the ouster. The district attorney general could investigate if there is some form of official misconduct on the part of an elected official.

•Would there be a special election if school board members are removed or resign? Would someone be appointed to fill the school board member’s unexpired term if he/she resigns or is ousted? If so, who has the authority to make this appointment?

The Tennessee Constitution provides that “vacancies in county offices shall be filled by the county legislative body, and any person so appointed shall serve until a successor is elected at the next election occurring after the vacancy and is qualified.”

No other meetings have been announced as of press time.