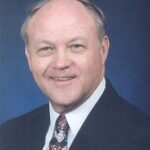 He graduated from White County High School, in 1955. Mr. Broyles played football at the University of Tennessee and finished his football career as a Golden Eagle, at Tennessee Tech, in 1961, where he was inducted into the Football Hall of Fame, in 2011.

He married the love of his life, Patricia Ann Stanakis Broyles, on Dec. 22, 1957, and they celebrated over 60 wonderful years together.

Mr. Broyles was the son of William Ray Broyles and Mattie Lula Bradley Broyles, who had resided in Sparta.

He was preceded in death by his wife, Patsy; his oldest sibling, Roberta; and his parents, Ray and Lula.

Mr. Broyles moved to Gainesboro after he and Patsy married and started his career with Farm Bureau the day after he graduated college and retired with over 40 years of service. He was a member of the Lions Club and served in many other community functions. He was also a board member for Citizens Bank for many years.

Mr. Broyles was a loving husband and devoted father. He loved the Lord and led his life according to his teachings. He was a member of the First United Methodist Church, in Gainesboro, where he was a leader in the church and sang in the choir.

The family will hold a private graveside service.

There will be a celebration of life ceremony at 3 p.m., Aug. 31, 2019, at First United Methodist Church, in Gainesboro, for everyone who would like to attend.

The family would like to thank all the caregivers who loved and cared for Daddy for many years.