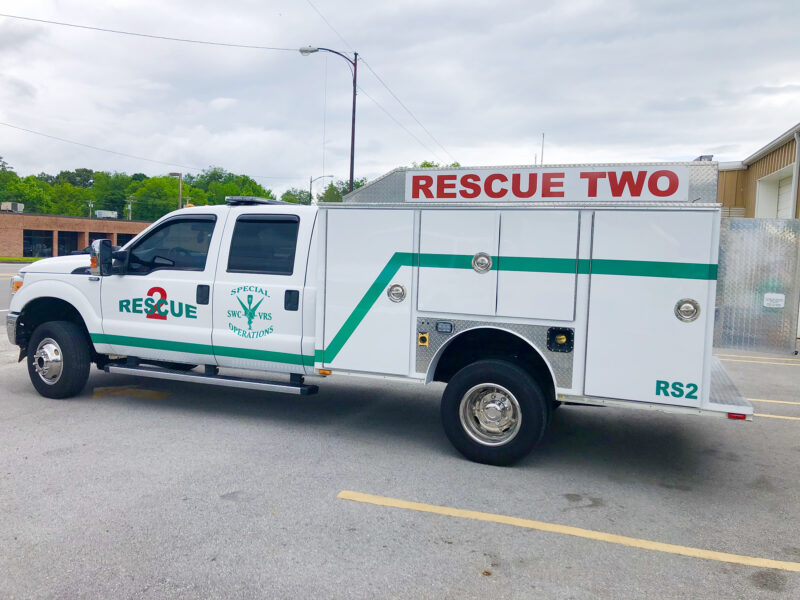 Sparta-White County Volunteer Rescue Squad’s new Rescue 2 truck is not only a newer model vehicle but also boasts enclosed storage for all of the equipment it will carry to and from rescue sites. Rescue 2 is set up like the squad’s big truck, Rescue 1. Both vehicles are extrication trucks.

Through donations from members of the community, the rescue squad was able to purchase a 2016 Ford F-350 to replace the 1986 Chevrolet as the new Rescue 2 truck and put it into service as of 12 midnight, on May 28, 2020.

“We’ve had the old truck for a long, long time,” T.C. Good, rescue squad assistant, said about the old truck that was a flatbed truck with toolboxes and piles of equipment stacked on. “The ‘86 has definitely met its retirement age.”

The new Rescue 2 truck, which was purchased and then taken to Robinson’s Racing to have the rescue squad and reflective decals applied, is not only a newer model vehicle but also boasts enclosed storage for all of the equipment it will carry to and from rescue sites.

“This truck is set up just like our big truck, Rescue 1,” Good explained, saying that both vehicles are extrication trucks. “It has all the tools necessary for an extrication – air bags, air hoses, air lines, scene lights, anything we need to do an extrication with – this truck has it.”

Good went on to say the only difference between the Rescue 1 and Rescue 2 units, other than size, had to do with the hydraulic pumps used to provide rapid lifting and lowering capabilities.  According to Good, the Rescue 1 unit boasts an electronic pump, while the Rescue 2 truck has an older pull-start model.

“We hope to replace that pull-start pump with an electric pump like the one on Rescue 1,” he said and also stated the new pump could feasibly cost more than $10,000.

The old 1986 model truck, which has been stripped of all its rescue equipment, is being sold, with first options going to existing rescue squad members, and the money will be put toward the purchase of the new pump. Another letter drive could possibly be in the works later in the year to raise the additional funds that will be needed.

“We are thankful for the support of our community,” Good said. “We couldn’t do all that we do without the support that is shown throughout the year. The residents of White County purchased this truck through the donations they gave. Because of their generosity, we will be able to continue providing aid wherever we are needed, even if it is in two places at once.”