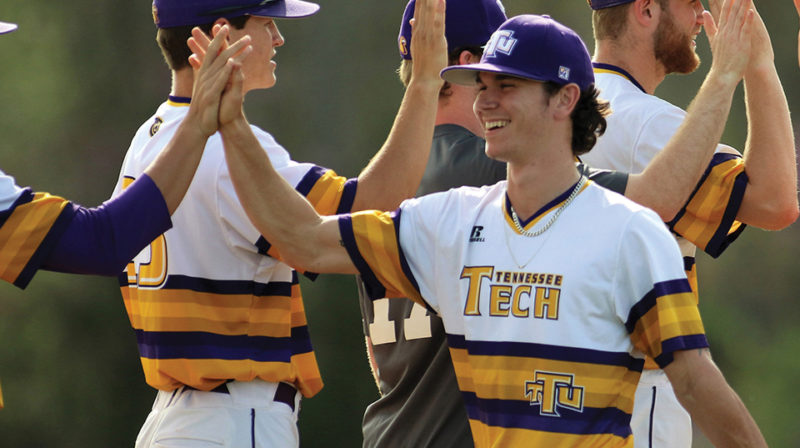 Sunday proved to be an up-and-down, roller-coaster of a contest, featuring three lead changes in the middle innings and plenty of offense to go around. Just like they did in both games one and two, the Panthers jumped on the scoreboard first, plating two in the top of the second inning on a long ball from Matt Albert.

Tech cut the lead in half in the bottom half, thanks to an RBI single up the middle off the bat of junior shortstop David Garza, but EIU plated two more runs in the top of the third to take a 4-1 lead, the team’s largest lead of the series.

Once again, the Golden Eagles had an answer. Sophomore center fielder Alex Junior led off the frame with a hit-by-pitch on the first offering. Two pitches later, junior third baseman Trevor Putzig laced a double down the third base line, putting two in scoring position for sophomore right fielder Kevin Strohschein.

The reigning OVC Player and Rookie of the Year flicked a double to left center field on the first pitch he saw, driving in both runs to cut the deficit to one. After moving to third on a ground out, Strohschein dented home plate to tie the game on junior first baseman Chase Chambers’ ground ball out up the middle to a shifted shortstop.

Both sides traded scoreless halves of the fourth, leading the Panthers to take back control of the game in the fifth with Albert’s second home run of the game, a three-run shot to left field.

Wasting no time, the Golden Eagles struck back with Junior leading off the inning with an infield single to shortstop. The speedster took second base on a wild pitch and then third on a throwing error by the pitcher. Putzig took the easy RBI with a rocket single off the third baseman’s glove, chipping the deficit back down to two.

Junior designated hitter Ryan Flick reached on a fielding error by the second baseman, bringing Chambers to the plate with a chance to play hero. A day after crushing two home runs, the junior came through again, torching the first pitch he saw over the scoreboard in left field to give the Golden Eagles their first lead of the game.

Refusing to go away quietly, Eastern Illinois had one more answer for the potent Tech offense, recapturing the lead with two more runs in the top of sixth.

The Panther looked like it might hold this time, as the Golden Eagles quickly recorded outs number one and two to start the inning. Then Junior showed just how valuable his speed could be. The sophomore struck out swinging, seemingly for the third out of the inning, but the pitch got away from the EIU catcher, allowing the speedy Junior to reach first safely and keep the inning alive.

The play couldn’t have been more important, as Putzig, the next batter up, turned on a 2-2 pitch to blast his second bombzini of the year over the left field wall to jump Tech back into the lead, 10-9. This time, the lead would stick.

Sophomore reliever Nick Osborne worked a scoreless seventh frame, striking out the final batter of the frame with two runners in scoring position. He recorded the first out of the eighth as well, eventually giving way to fellow sophomore Ethan Roberts after allowing a base hit and reaching his pitch limit.

Roberts needed just two pitches to hand the bats back to the Golden Eagles, inducing a ground ball to Chambers at first, who touched the bag and hurled the ball to Garza at second base to snag the runner for an inning-ending double play.

Putzig provided an insurance run with a sacrifice fly to right center field in the bottom half of the eighth. Strohschein chipped in as well, smashing his sixth moon shot of the season to left center field for two RBI and a 13-9 lead.

After surrendering a leadoff double to Dougie Parks, Roberts dialed back in to force a high fly out to Garza in shallow center field for the first out. The Tech closer then punched out the final two batters of the game on swings, garnering his eighth save of the year to move into third place in program history for most saves in a single season.

Senior Kit Fowler took the victory on the day after completing the sixth inning for Tech, moving to 2-1 on the year. Offensively, Putzig, Strohschein and Chambers each recorded four RBI, with Putzig leading the way with three hits and three runs scored. Junior led Tech with four runs scored after finishing 2-for-3 and reaching base all five times he went to the plate.