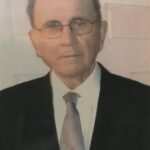 Roy Douglas Stafford, 81, departed this life peacefully, at his home, on Feb. 9, 2020, surrounded by his family.

He was a resident of the Cassville community, in White County, where he had lived since the age of 7.

Mr. Stafford was the second of six children born to Lando G. Stafford and Ruby McCoin Stafford, both of whom preceded him in death. His sister, Janice Hutson, passed away in March 2019.

Throughout his life, Mr. Stafford enjoyed returning to his birthplace and childhood home, in Jackson County, to research family and community history. In retirement, he became an avid vegetable gardener and established an orchard of more than two-dozen fruit trees.

He was a member of Oak Grove Church of Christ.

Mr. Stafford married on Dec. 20, 1958 and is survived by his wife, Mary (Hudson). He also leaves two sons, Jeff (Sherrie) and Jack (Carrie), all of Sparta; his daughter, Gina (Bill Phelps), of Chattanooga; grandchildren John Douglas (J.D.) Stafford (Ashley), Bridgette (Brent Lawson); and twin great-grandsons, Malcolm and David Lawson, age 8, all of Sparta. He also is survived by his sisters, Joyce Broyles; of Sparta; Charlotte Tays (Clarence Jr.), of Cookeville; and brothers, Garvis, of McMinnville, and Gary (Wanda), of Sparta.