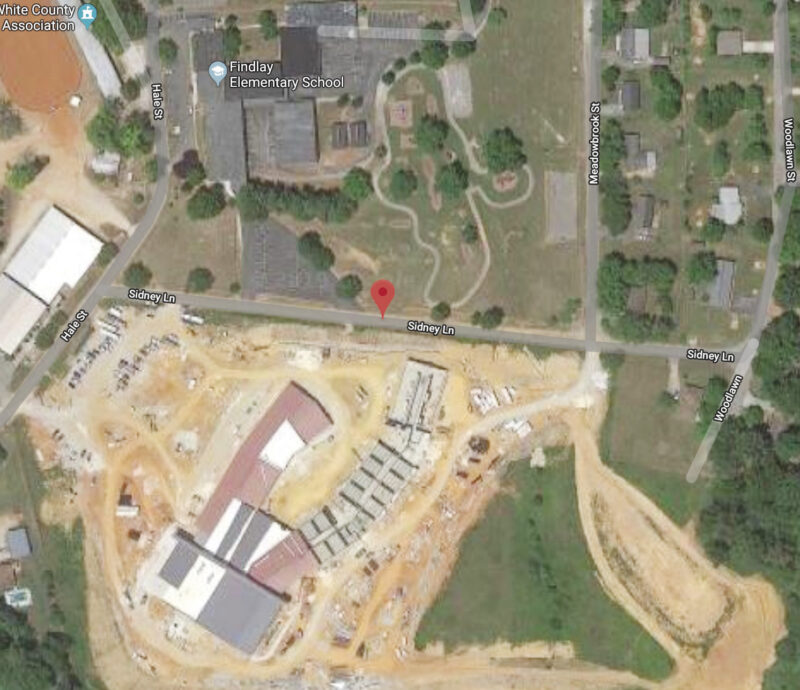 An aerial view of Sidney Lane shows its proximity to the old Findlay School location and the new school (while still under construction). White County School Board wants the road closed for safety purposes so students can still utilize the playground at the old site.

During the White County Board of Education meeting, on Jan. 9, Di-rector of Schools Kurt Dronebarger requested acceptance of the proposal made by the city of Sparta for the closure of Sidney Lane. The road is adjacent to the newly-built Findlay Elementary School and had been requested for closure for safety purposes so students could still utilize the playground at the old Findlay site, which is directly across the road.

In that proposal, the city of Sparta wanted forgiveness of $350,000 of debt. The school board would then receive the high school baseball field and be able to close Sidney Lane.

As a part of the deal, $100,000 of remaining debt owed to the school system would be paid immediately with a 15 percent reduction for early payment and 22 paved parking spots at the baseball field.

“It is my personal feeling that Sidney Lane should be closed for the kids,” said Dronebarger to the board. “It is a very infrequently used street that has no addresses on it and no homes. I don’t believe there are any driveways that access that other than the ones for the schools. The city has made it clear it wouldn’t be closed for any reason at all without any compensation.”

The board agreed to accept the city’s proposal, but requested the re-duction for early payment and the 22 paved spots be removed from the language.

“Ultimately the school board wants to keep kids safe, and we know the county and city want the same thing,” said Dronebarger.

The proposal will now be sent for consideration/approval to White County Board of Commissioners who has a vested interested in some of the properties listed in the deal.

“We would not provide transportation,” said Dronebarger. “It becomes the issue are they allowed to drive to a certain location and be picked up by one of our bus stops and be brought to school. Our initial response is that it will be on a case-by-case basis and that there would have to be some hardship.”

Dronebarger said the school system is not trying to take students from other counties. As an example, he said there was a situation where a person lives in DeKalb County and has to drive five miles through White County to get to the road that winds its way back into DeKalb County.

“Where they go now, they go about seven-tenths of a mile to a bus stop to go to White County schools,” said Dronebarger. “It’s over six miles to get to the bus stop to go to DeKalb County schools. Sometimes those students walk. Instead of walking seven-tenths of a mile, they would be asked to walk six miles. That is obviously not in the best interest of the safety of the students.”

“With that being said, I propose a fee of $500,” said Dronebarger. “That is significantly lower than what surrounding counties are doing.”