Shakespeare in the Park opens Sept 27 at Dogwood Park, in Cookeville 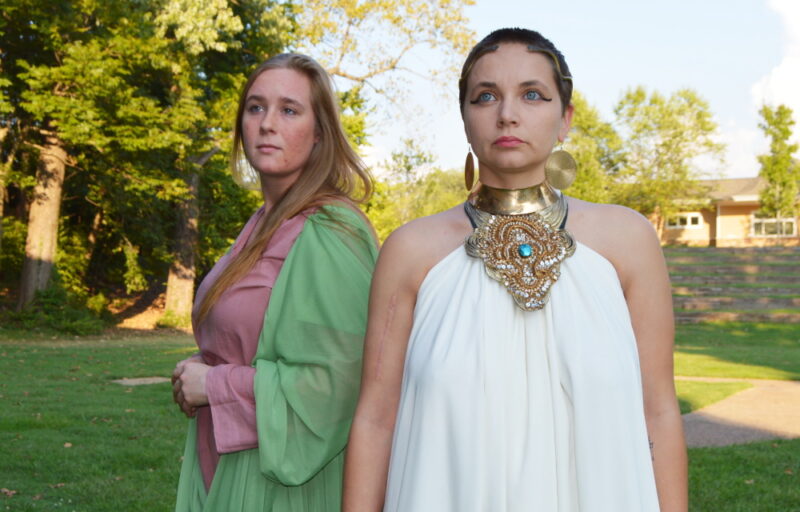 Jordyn Strilecky, left, as Imogen in “Cymbeline” and Stacie Brewster as Cleopatra in “Antony and Cleopatra” prepare for their Shakespeare in the Park roles.

William Shakespeare’s “Cymbeline” and “Antony and Cleopatra” are coming to Dogwood Park.

“There’s something for everybody in Shakespeare,” said Matthew Wilson, director of “Cymbeline,” which opens at 7 p.m., Sept. 27, during Cookeville’s 16th annual Shakespeare in the Park. “That’s why Shakespeare has lasted this long.”

“Antony and Cleopatra,” directed by Samantha Raper, opens Saturday at 7 p.m. It’s the first time that two Shakespeare plays will be performed in repertory at Dogwood Park. Each show is approximately two and a half hours, including an intermission. Admission is free, and concessions are available.

Tragedies and romances. Comedies and histories. Shakespeare, whose works go back to the late 16th and early 17th centuries, has penned many themes.

“He wrote about things people are always going to be interested in,” Wilson said. “Why do we love? Why are we jealous? Why do we do the crazy things we do for the reasons we do? The human aspect is explored in everything.”

“Cymbeline” is the story of a king whose daughter Imogen secretly marries Posthumus, a member of the king’s court. When Cymbeline discovers the marriage, he banishes Posthumus because Imogen must produce a fully royal-blooded heir.

“Antony and Cleopatra” tells of the romance between Cleopatra, the queen of Egypt, and Mark Antony, a ruler of the Roman Republic along with Octavius Caesar and Lepidus.

Both Wilson and Raper have directed in the Cookeville Performing Arts Center’s Backstage Series and Tennessee Tech University’s Backdoor Playhouse, but this is their first opportunity to direct Shakespeare in the Park.

“We do it for the community – and a little bit for ourselves,” Raper said.

There’s just something special, they said, about Shakespeare plays in the park, especially since they’re free to the public.

“The stage is all lit up, and people can see it from the road or hear it if they’re walking in the park,” Wilson said.

Many audience members bring lawn chairs and blankets for a cozy evening under the stars.

While Shakespeare in the Park is not unique to Cookeville – similar productions take place in numerous cities, including Nashville and Knoxville – the experience itself can be distinctive, depending on the day, weather, temperature and a host of other variables. That’s true not only for the audience, but the actors and directors.

On the technical side, lighting and sound can be a challenge.

“All those things are different when you’re outside,” Wilson said. “You have to make sure your sound is good to be heard over the traffic. Your lighting is completely different because we start at seven o’clock, when it’s not quite dark yet. As it gets darker, you can do more with the lights.”

Raper said it sometimes feels as if the actors are competing with the outside noises.

“There are barking dogs, there’s always an ambulance – or four,” she said. “There are usually cannons from Tech football games, helicopters and loud trucks.”

Another challenge is the Shakespearian language – for the actors who must learn the words precisely and then suit those words to the action, as well as audience members who may have difficulty understanding the dialogue.

“The language is so far removed from our own,” Wilson said. “You have to be able to express it with your body and actions. Otherwise, people won’t know what you’re saying, and they’ll check out.”

Wilson and Raper emphasized the importance of Shakespeare in the Park, saying it’s an enriching experience for all ages. In particular, they see it as a way to expose younger generations to Shakespeare before they encounter “words on a page” in an academic setting.

“In the park, I’ve seen kids as young as 5 or 6 sitting and listening to it,” Wilson said. “When they read it in high school, it’ll click.”

Raper added, “I feel like people are conditioned to not like Shakespeare. They have to read it in school, and the language is tough.”

But Shakespeare doesn’t have to be that way. Not in Cookeville, anyway.

“It was never meant to be read – it was meant to be experienced,” Raper said. “I just enjoy trying to change people’s minds.”

Shakespeare in the Park is produced by the Cultural Arts Division of the Department of Leisure Services and is funded in part by the Cookeville Arts Council. For more information, call the Cookeville Performing Arts Center at (931)  528-1313 or visit www.cpactn.com.