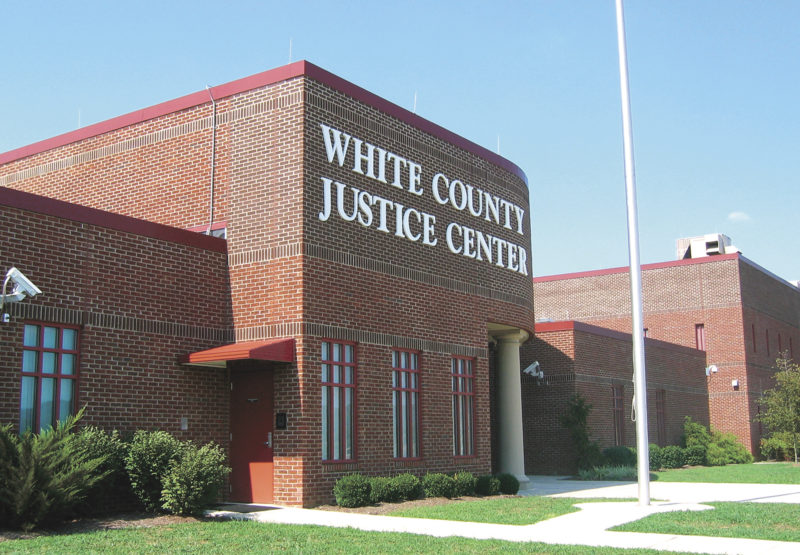 White County Sheriff Steve Page explained to county commissioners who are members of Steering Committee B that an ankle bracelet program for non-violent inmates would cost less than physically housing the offender in jail.

White County Sheriff Steve Page addressed members of Steering Committee B, on Oct. 1, 2018, about overcrowding at the jail and the possible solution to the problem.

Page explained that ankle bracelets for non-violent offenders would allow some of the inmates to do their time within their own homes.

Cami Howard, White County Sheriff Department head of administration and communications coordinator, presented the committee with facts and figures about the money the office would be saving by switching at least 45 inmates to an ankle bracelet system, which was the number of inmates that could potentially be placed on the ankle system as of Oct. 1. The committee was concerned about the monitoring of the system and how it worked. Page explained how his office would handle it.

“This is strictly for non-violent offenders,” said Page. “These will be people we can monitor everywhere they go.”

The committee showed concerns about where the revenue would be coming from to pay for the program. Howard stated the amount to house an inmate is approximately $8 per day. When an inmate is placed on the ankle bracelet program, the amount to maintain the inmate goes down to $3.25 per day, or $100 per month. The sheriff department plans to charge the inmate that amount. Howard explains it will be some time, however, before they will be able to see that money returned to them.

“Currently, we make commission off of phone calls and video visitation,” said Howard. “This money would be used up front to obtain the equipment for the ankle bracelet system. The up-front cost would come from us before we can recoup the money from the inmate. The jail is creating this revenue source, and, if we can use it to combat the overcrowding issue, it will limit our liability.”

The state of Tennessee has already warned the jail about the overcrowding issue. Page explained to the committee that if something isn’t done soon, the state has the authority to come in and make the county build another jail, which could cost into the millions. Page was not asking for the funds to implement the program, only the permission to allocate the funds already coming into the jail.

male enhancement: ed doctor near me 3 5 inch dick how to massage a penis verecosele low libido how to make your dick bigger real shit no pills or money very low calorie diet effects sex drive in men dick straps does daily use of a pump increase size permanent penis centrum energy tryvexin male enhancement where to buy asox9 sex at the drive in car naked yohimbe supplement walmart what does it mean when your boyfriends sex drive lessens kosher herbal male enhancement sex tips to drive a man crazy enzyte natural male enhancement side effects small penise pmma penis how long does it take to get an erection after taking viagra is there such a thing as a penis enlargement pill request viagra information horse penis bone is sex drive a symptom of pms pills for man penis grow 7 inches has the patent run out on viagra i men s there something i can take to kill my sex drive maximum test supplement review juul and sex drive in men what can help my low libido chocolate sex drive best ways to boost testosterone cardio is great for sex drive men viagra poster viagra results video mens health magazine male enhancement pfizer viagra side effects get your dick out getting most out of viagra increase testosterone vitamins viagra leagl sweden linseed oil for penis growth what is the normal milligram dosage of viagra prescribed low libido male dog causes what do you do when you find a viagra pill regular penis pictures how does viagra work in your body fixing ed