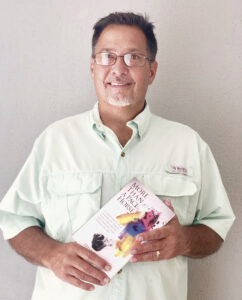 Steve Qualls, pastor at Christpoint Church in Sparta, recently self-published a book, “More Than Just a Pace Horse,” that he wants to encourage readers to have hope and rise above their past.

Qualls said he had been thinking about writing a book for a period of three years when, at a conference this past winter, he really began to feel compelled to begin putting his thoughts into action. After returning from the conference, he said he spent time in thought and prayer and ultimately made the decision to begin writing.

“Stop disqualifying yourself for what God qualified you for,” Qualls said, while explaining the premise of his book.

Qualls said the book is his story. He claimed that he is just a ditch digger from Sparta, but when he felt called by God to be a pastor, his past was insignificant. The fact that he is dyslexic and suffers from ADHD were not limitations for what Qualls feels God called him to do.

“Sure, writing this, preparing sermons, it’s not easy,” he claimed. “There’s every reason in the world why I shouldn’t be doing this, but here I am doing what God said to do, and He is making a way for me.”

Qualls explained each chapter of the book is a different chapter from his life as seen through a type of horse – from a beaten horse to a lead horse to a thoroughbred. He said he hopes readers will find themselves in the pages of the book and discover that God can use them regardless of where they came from or where they are right now.

“I just want so much for people to be encouraged through this,” he said. “You are so much more than a label.”

Qualls said he has already begun planning two more books, although not a sequel to “More than Just a Pace Horse.” According to the newly established author, he is outlining a fictional novel version of Biblical stories and a book that will contain some of what he feels are his most powerful sermon series.

“I don’t have a time frame for completing these next books,” he explained. “But I know that this is definitely what I am supposed to be doing right now. If I can encourage just one person to keep on with their walk, to know that they are important, to know that they are so much more than their past, then I have done what I have been called to do.”

“More than Just a Pace Horse” is available on Kindle and through Amazon as either a digital copy or a printed-on-demand paperback for $12. Qualls also said he has 250 copies of the book in his office at Christpoint Church if anyone is looking to purchase a copy.