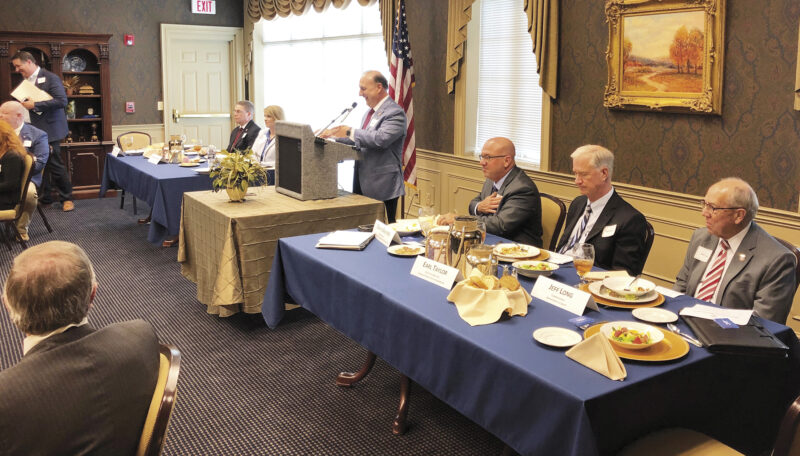 State Senator Paul Bailey, of White County, addresses the crowd at the recent mayors’ conference held in Sparta. Numerous state dignitaries, as well as county and city officials from District 15, which Bailey represents in the Tennessee General Assembly, were in attendance. (Photo by SHEILA ROBINSON)

On July 31, State Senator Paul Bailey, of White County, hosted a mayors’ conference, which aimed to connect local government officials with vital state resources, particularly those that aid the rural communities in District 15 which he represents.

“The purpose of this conference is to ensure our local officials, especially our mayors, receive the latest information on state resources and services which will aid our communities,” Bailey said during the event held at First National Bank, in Sparta. “Any time I can facilitate a meeting and have commissioners come to Sparta and the Upper Cumberland to meet with county mayors, it’s a win for everyone: the mayors, the people they serve, and the state officials.”

Bailey said he was astounded with the number of commissioners and officials who attended the event.

“When I began putting this together, my idea was to get one commissioner to attend, but the response was outstanding,” Bailey said. “You don’t usually see this many stakeholders assembled like this. The mayors may work with these commissioners on a weekly basis, but they don’t actually get to meet them. To do this at this meeting solidifies our [Upper Cumberland] position in the state and helps to alleviate difficulties in the future.”

Nine counties from the Upper Cumberland area, including all six of the counties that fall into Bailey’s district, were represented by city and county mayors as well as presidents of their chambers of commerce. Sparta Mayor Jeff Young, White County Executive Denny Wayne Robinson, and Sparta-White County Chamber of Commerce President Marvin Bullock were all in attendance.

“This was a great opportunity for Sparta and White County to meet, face to face, the politicians and decision makers that we work with on a regular basis and to give us insight into where we are headed and give us the opportunity to move forward,” Robinson said.

Robinson said the greatest takeaway from the meeting was to be able to make personal connections with the representatives in attendance. He also said the meeting allowed him to receive an explanation as to the reasoning behind some of the processes that happen within the state and to get an insight for future funding.

“From the information we received at this meeting, we can have a better understanding as to when a good time would be to push certain projects into the forefront of our planning,” he said. “Knowing what we know now, we may choose to move some projects and change the timing of some things.”

Bailey said all of the feedback he has received from the counties in attendance has been very positive. He also said  many of the commissioners and officials who came to Sparta for the meeting admitted to never having been to the Upper Cumberland before.

“Now when they hear from us, when the mayors from these counties contact them, they have a place to think about as well as faces to go with the names they are hearing,” he said. “This was a big accomplishment, to get all of these decision makers together in one place and to have that place be here in Sparta.”

“Everything about this meeting was a success – from the number of stakeholders to the number of mayors,” he concluded. “From the networking to the question- and-answer session where real questions were being asked and answered. And the venue was perfect: First National Bank and their team did a wonderful job hosting this meeting for us, and I really appreciate them sponsoring this event. The people I have already talked to have had nothing but positive comments about the whole experience, some even saying they felt it was better than any meeting they have attended anywhere else in the past.”