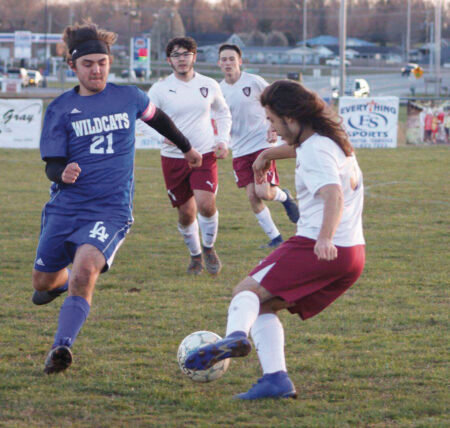 “Playing soccer for so long has taught me about being a good teammate and really about working hard in life,” Austin Kirby, who has played soccer for seven years, talked about how the game has helped him grow. “Soccer is a 90-minute run, and you have to learn to pace yourself, when to make plays and when to help out a teammate in scoring a goal. It’s just like life, you have to learn when to do certain things and how to play out situations that happen in life.”

The situation that he is having to play out right now is the unforeseen loss of his senior season as a White County Warrior because of the COVID-19 pandemic.

Kirby, who rotates his time between left wing, center mid and striker, has always been a Warrior, playing soccer throughout both middle school and high school and spending the last two fall seasons as a slot receiver for the maroon and gray football team as well.

Memories flood his thoughts when Kirby thinks back over his years as a Warrior and the times he spent traveling to and from games with his teammates. Sharing stories and jokes and songs will be what he holds on to as part of what made it all worthwhile.

“Traveling to the different away games throughout the years with the boys,” he said and relating that those trips will always be among his high school highlights.

Kirby has other memories, too, like the time he watched his coach (Scott Wilson) wrestle with a teammate during a lull in game activities or the time he wore his shirt inside out to team picture day and no one told him.

Those memories are what he will push to the forefront of his thoughts when he talks about his days as a WCHS Warrior, rather than the memory of what he may have lost.

And, as Kirby said, you have to learn when to do certain things, and the next of those “certain things” for him is Kentucky Wesleyan College for business administration and accounting. He has plans to begin studying in the fall with the hopes of one day opening his own sport-related business.

He claims the game has changed him, both as a player and as a person, but Kirby also knows it wasn’t by accident but by design and through the guidance of the people who care about him most.

“I want to thank my mom and dad for supporting me throughout the years and helping me go farther into the game and go to a higher-level player,” he said. “I want to thank Coach Wilson, Coach Rittenberry, and Coach Haston for pushing me harder and harder every day at practice to make me a better player and a good all-around teammate.

Of course, he knows that those “boys” he shares some of his favorite memories with helped shape him into the person he is today.

“I also want to thank my teammates through the years for working with me and helping me learn the game more and to learn more about being a better player and companion on and off the field,” he said.

While it is likely that Kirby won’t have many more, if any, of those infamous bus rides with his teammates, he knows his future, and theirs, goes beyond the soccer field, and he wants them to know, no matter when they play their next game that he is with them and that his “seniorly” advice to them pertains to life as well as sports.

“Talent without working hard is nothing.”