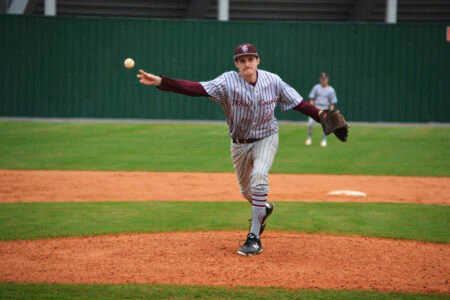 “Playing for White County High School has taught me that no matter what goes on, we are a family, and we stick together no matter what,” Joe Nelson, a senior pitcher and third baseman for the Warriors, said.

Nelson said that while the final season of a game he has played for 14 years is in question, he knows he’s not alone.

Nelson, who has worn the maroon and gray for four years, knows the game he loves has helped shape him into the person he is today and has directed him toward his future, which will include time at both Vol State Community College and Tennessee Tech as he pursues a career in sports broadcasting.

Playing baseball has taught me that in order to succeed you can’t play by yourself,” he said as he also stated the same principle holds true off the field as well. “You have to play as a team in order to win.”

Nelson said he is grateful for his family, one of the key players on his “team,” as they have spent countless hours at ball fields supporting him over the past 14 years. His team in life also includes the coaches he has had over the years, from Little League on up through high school, and who he says spent numerous hours trying to make him better on and off the field. Teammates who have made the game fun and classmates who showed up to support their Warriors baseball team are also on his list of important players in his life.

“I would like to thank my best friend who has been with me through thick and thin,  even after the bad practices I would have, ” Nelson said, as he talked about Sydney who would never let him give up.

And, while Nelson knows the game of baseball has been a classroom teaching him more about life than he would have thought possible when he first stepped on the field as a kid, it has also been full of laughs and memories - from the thrill of hitting his first out-of-the-park homerun back in youth league baseball, to having back-to-back walk-off hits with fellow senior Dustin Guy in what could be the final two games of their high school careers, from breaking his nose in practice when the ball hit the lip of a base and bounced up and smacked him in the face, to having his coach confined to the dugout during a game for no apparent reason.

“In one game we were trying to pick a runner off at second base, and our second baseman actually landed on the runner. The umpire thought we were playing dirty, so he told Coach Floyd he was confined to the dugout for the remainder of the game,” Nelson said, remembering the moment as one of his favorites because the confused reactions were great. “Our player was just trying to save the ball.”

Nelson has nothing but love and respect for the man who has coached him over the past four years.

“I would like to thank Coach Floyd for helping me through everything, not only in baseball but in life,” he said. “You’ve made a big impact on my life, and I’d like to thank you for letting me play my senior year and not giving up on this year’s baseball team. Thank you, Coach Floyd.”

Nelson doesn’t know if he will play another game under his coach and mentor, but he knows his life is different because of him. And he knows his teammates, the future of the Warrior baseball team, has work to do.

Nelson told his teammates a lesson he takes with him into his future and that he hopes they will remember, too: “Remember that when no one expects anything from you, prove them wrong.”