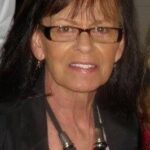 She taught school at Doyle Elementary for nine years. Mrs. Sparkman then came home to raise her family and work on the family dairy farm. She started her own business, Sparkman Poultry Farm. Mrs. Sparkman also started a successful bakery business, Nana’s Sweet Treats. She was an active member of Gum Springs Baptist Church.

Mrs. Sparkman was preceded in death by her father, John Ross Anderson, and a brother, John Stephen Anderson.

Survivors include her mother, Juanita Anderson, of Sparta;