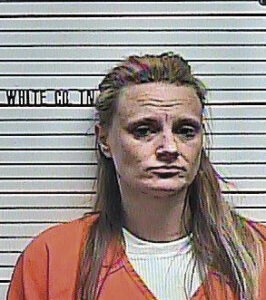 A 48-year-old man and a 35-year-old woman, both of Sparta, were arrested last week after an incident at Advance Financial.

Tanisha Marie Taylor and Greg Hutchings were taken into custody, on July 6, 2019, by officers from Sparta Police Department, after they found Taylor in possession of drugs while attempting to cash a forged check. Hutchings was wanted for violation of probation.

Police officers were dispatched to 447 West Bockman Way, at Advance Financial, at approximately 3:45 p.m., on July 6, about a male who the employees believed to be under the influence.

According to an arrest warrant, upon arrival, Patrolman Cole Stickler, of Sparta Police Department, saw a male standing in front of the business. The man was reportedly slumped over, with a drink about to fall out of his hand.

Stickler recognized the male to be Greg Hutchings. Stickler discovered that Hutchings had an outstanding warrant out of White County for violation of probation, and Stickler detained Hutchings.

When questioned, Hutchings stated he was at Advance Financial with a female who was inside cashing a check. Stickler brought the female outside and asked for her identification. According to the arrest warrant, Stickler recognized the female to be Tanisha Marie Taylor. He advised Taylor to stay on the steps in front of the business.

Stickler then walked to his patrol car to request a check on Taylor from E-911 for outstanding warrants.

While Sgt. Brent Copeland, of Sparta Police Department, was searching Hutchings, Taylor reportedly went to the truck in which she and Hutchings had been traveling and started rustling through items from what looked like, according to the arrest warrant, an attempt to hide something on the passenger side. When Stickler confronted Taylor, she reportedly shoved a brown pouch in her purse.

According to the arrest warrant, Stickler asked Taylor to retrieve the brown pouch. She reportedly stated the pouch did not belong to her and handed it to Stickler. Stickler looked inside the pouch where he reportedly found a used syringe.

Stickler then went inside Advance Financial to speak with the employees. Two employees stated that Taylor had come into the business to cash a check in the name of another female and that the check was already signed. The employees said Taylor even provided a Social Security number that matched that of the female whose name was on the check.

A further search of the truck revealed two new syringes in an open pack and one syringe that was loaded with a clear liquid and found inside a wash glove for a car. These items were located on the passenger side of the truck. The clear liquid was field tested at Sparta Police Department and tested positive for meth. The substance was sent off for confirmation testing.

Taylor also reportedly stated she was on probation out of Putnam County.

Hutchings was arrested and charged with violation of probation. His initial appearance in court is set for July 19, 2019.