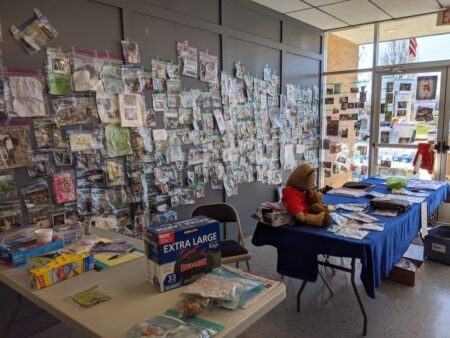 This photo shows just how many photos and documents were collected on March 7, less than a week after an EF-4 tornado hit the western part of Cookeville in the early morning hours. Personnel and volunteers at Tech’s Archives worked countless hours documenting the items and uploading them to a Flickr website in hopes of reuniting them with their owners.

Since the March 3 tornado threw people’s belongings and lives into disarray, personnel at the Tennessee Tech Archives and Special Collections have been working hard to build a centralized, long-term place that could reunite found photographs and documents with their owners.

The effort has turned into something bigger, with approximately 3,500 photographs, greeting cards, journals, letters, drawings and children’s artwork collected from a variety of areas and brought to the archives for digital processing.

“The Archives’ goals were to clean and house the personal belongings according to archival best practices and digitize the photographs and other materials into an easy to browse and search online location to minimize the need for families to look in physical and social media location until they could be claimed,” said Megan Atkinson, university archivist. “The Archives’ intent was also to minimize the strain on the affected families, many of whom were already overwhelmed from needing to focus on applying for FEMA aid, working with insurance and finding new homes rather than tracking down disparate family belongings.” 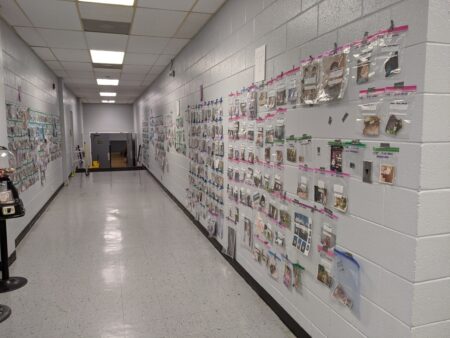 This photo shows the overflow of photos collected at the Community Center, on March 11.

Atkinson said initially she thought the Archives would receive about 500 photographs from the storm, an estimate she came up with from her visits to the Cookeville Community Center and Soul Craft Coffee right after the storm. But since establishing those two places as drop off points following the storm, there have been 2,500 photographs received.

There were a number of volunteers at the Community Center who sorted the items that were dropped off and made this project work prior to the items were sent to the Archives. When those items got to the Archives, it was all hands-on deck with help, from family members and groups coming in to help sort through the documents.

“The process is to have the photographs numbered, cleaned (as best as possible), photographed, sleeved in an archival sleeve, then uploaded online,” Atkinson said. “Getting the photos out of the wet and pulling the dirt off is a good start in preserving anything.”

There are challenges with this process too. Many times there is no way to preserve them due to large parts of the image being lost, torn or even ripped in half. In other instances, the photograph looks like someone shook it up for 24 hours in a bag of broken glass.

“My biggest concern with this project was reuniting people to their photographs in a helpful way,” said Atkinson. “What I saw happening on Facebook and other areas was something that worked for now, but not later. The archives is that later part. Our purpose is to catalog materials, preserve them and make them accessible to people. If we can do this successfully, we should be able to help those looking for photographs in Putnam County, but also the surrounding damaged areas.”

She has received photos found as far as Jefferson City and Knoxville.

They use archive soft brushes, microfiber cloths and document erasures to get the bulk of materials off.

“It takes a very clean surface to ensure you are not further damaging the photographs,” Atkinson explained. “We are also using slightly wet towels to get some dirt off. That only works on some photographs and materials.”

Through this project there have been many success stories.

“Many items were reunited with their families at the community center,” said Atkinson. “It was very sad watching people find what remained of their photographic memories being pulled off the wall. I know some people may not understand how important photographs are to people since they use cloud storage, but some of these photographs are perhaps the only physical memories people have of a person or time in their life. These photographs are the evidence and proof that allows them to tell their stories.”

The great thing about this storage capability is that any photos can be accessed now or later.

“Our biggest goal is to get the word out that the site exists for these families so that they can reunite themselves with their memories,” she said. “When a photograph is claimed, it is taken off the site.”