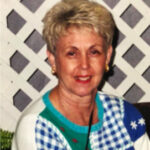 Thelma Jean Holman Clark, 82, formerly of Sparta, passed away peacefully in her sleep at her home, in Mt. Juliet, on Jan. 9, 2020.

She was born March 26, 1937 to Walter Bransford Holman and Bessie Mae Cook Holman.

Her senior year in high school, she was selected by her peers as Miss WCHS, and ,in that writeup, she was described as having a    charming smile, a friendly personality, and an outstanding perseverance.  Those qualities continued throughout her life.

She was a member of Mt. Juliet Church of Christ, and a memorial service will be held at the church, at 2 p.m., Jan. 18, 2020, with visitation noon-2 p.m.  Services will be conducted by Wayne Miller and Walt Holman.