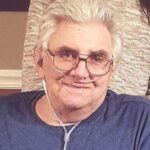 He was a veteran of the United States Air Force. He was a man of    many traits, his favorite was truck driving, but the job he loved most was being a dad to his children and Pa to all his grandbabies.