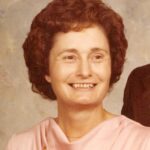 She worked many years as a teacher’s aide at Central View Elementary School, in Walling, but the full-time job she most excelled at was as a wife and mother. She was the model of a Southern lady: gentle, soft-spoken, patient, compassionate, and tough as nails. Mrs. Johnson devoted her life to her family, especially to the care of her daughter, Wanda. Later in life, she adopted many friends and family as honorary grandchildren. She was everybody’s Ma.

Funeral service will be 11 a.m., Feb. 14, at Spring Hill Baptist Church, with interment following in the church cemetery. Nephews will serve as pallbearers.

The family wishes to extend thanks to Sandy Sloan, Willeen Shelton, and the staffs of Kindred Hospice and Home Instead.