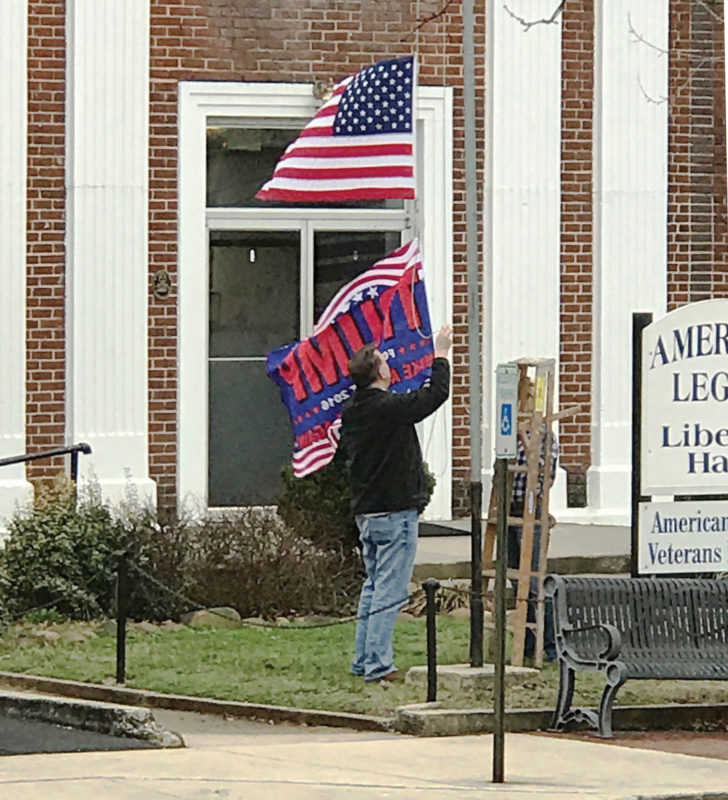 A “Trump for President” flag, which had been raised just below the American flag, is lowered at American Legion Post 99 by an unidentified male, who is not necessarily the individual who had raised the flag hours earlier.

For two hours, on Jan. 23, a “Trump for President” flag flew on the flagpole outside the American Legion Post 99 building, located in Liberty Square.

The flag was raised just below the American flag, on the same pole, drawing concerns from donors, members and other residents familiar with the rules of the American Legion, whose mission is to serve veterans without political affiliation.

In fact, the Legion’s apolitical stance is found twice in the Constitution and By-Laws of the American Legion.

Article II, Section 2 states, “The American Legion shall be absolutely nonpolitical and shall not be used for the dissemination of partisan principles not for the promotion of the candidacy of any person seeking public office or preferment.”

The second instance is mentioned in United States Code Ann. Title 36 Ch. 217 Sec. 21706, which states, “The corporation shall be nonpolitical and may not promote the candidacy of an individual seeking public office.”

The flying of a flag that not only endorsed Donald Trump’s presidency, but also included his slogan, “Make America Great Again,” is a direct violation of these rules, according to Legion officials.

Once they were made aware that a flag endorsing Trump was flying at the Legion building, officials state that they took immediate action to rectify the infraction of Legion rules.

Post 99 Commander Gary Sides says he was “upset” when he found out that the flag was flying on Legion property.

“We do not condone that, and it’s not representative of our post,” Sides explains. “As soon as I heard about it, I had it taken down.”

Gus Rish, region commander, stated that he has spoken with the individual within the Legion building who had raised the flag and confirmed the flag flew for approximately two hours.

He emphasized the Legion’s stance of remaining apolitical.

“We deeply apologize,” Rish stated. “We do not take sides, and I couldn’t tell you why this individual did this.”

American Legion Hennessee Baker Post 99 was organized, in 1920, and chartered on April 18, 1930. It was named for Pvt. William Clayton Hennessee and Pvt. Joe Baker, who were shot and killed in the Argonne Forest Battle in France during World War I.