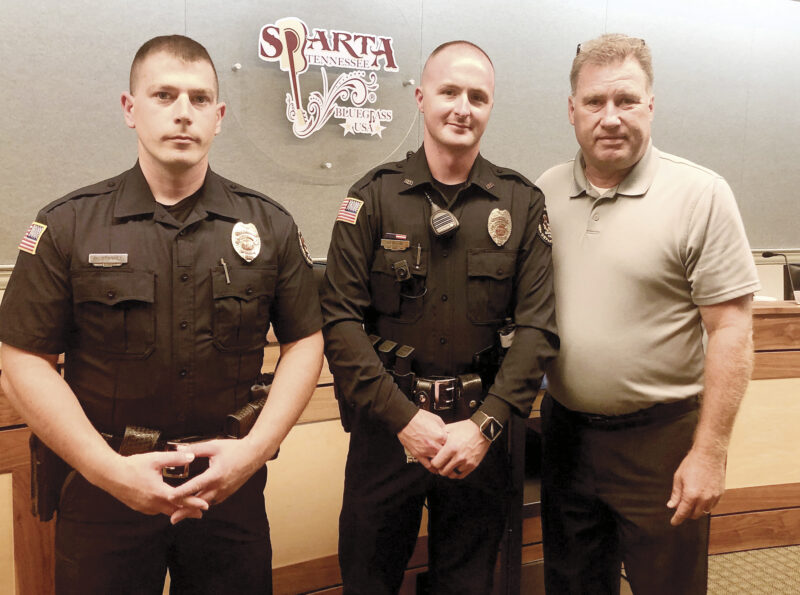 Two new city police officers were sworn in, on Sept. 5, 2019, during the Sparta Board of Mayor and Aldermen meeting. L-R: Matthew Starkey, Jared Denton, and Sparta Mayor Jeff Young. (Photo by RACHEL AUBERGER)

At the Sept. 5, 2019, meeting of the Sparta Board of Mayor and Aldermen meeting, patrolmen Jared Denton and Matthew Starkey were sworn in to serve and protect the City of Sparta.

The city police department had previously been approved to hire two new officers to complete their force. According to Doug Goff, the newly appointed chief of police, both Denton and Starkey are fitting in well with the current staff.

“We appreciate them coming with us,” Goff said. “They come to us with nothing but great reviews.”

In other business, the board approved the first reading of Ordinance No. 19-928, which amended Municipal Code Title 14, concerning residential zero-lot line developments. The amendment changes the required front yard from 50 feet to 35 feet.

“It didn’t match anything we actually had existing here,” Mike O’Neal, codes enforcement officer, said. “In some of our lots, there wouldn’t be enough room to do that, so we cut it back to 35 and 25 with a buffer.”

O’Neal explained the original ordinance was copied from Cookeville, and the footage allowed there wouldn’t work in Sparta.

“Fifty was way more than we had existing in any of our current codes,” he explained, stating all other codes in the City of Sparta have 30 as the minimum footage allowance, “and this puts it more in line with our existing codes.”

The first reading of the ordinance passed with Bobby Officer casting the only “no” vote, and Hoyt Jones being absent.

Other items on the agenda included reports from the department heads, which resulted in finding that Capt. Denny Webb, who is the staff firefighter on the east side of the city, has been certified as a firefighter 2 and is also EMT certified.

“We are highly trained on this side of the city now,” Kirk Young, fire chief, said.”

Additionally, O’Neal reported that letters have been sent to property owners whose land has become overgrown, crowded, or out of codes, asking them to clean up the property.

“If I can get the homeowner to do that, that keeps Dillard’s guys [the public works department] from dropping what they are doing, going out, tying up city money,” he explained as to why it is taking time to get some of the properties cleaned up. “I try to give every opportunity to work with the homeowners that we can to get things taken care of without costing the city any money.”

Progress around Liberty Square was discussed, including work on the building next to city hall, which has been designated as a pizza restaurant, and 14 and 16 Liberty Square, which once belonged to Sparta Office Supplies, as the new owners are making progress with renovations, including installing sprinkler systems, which has caused them to have to dig up ground around the corner of East Maple and Liberty Square. It was also stated the building at 9 East Maple Street, the old M and H Hardware building, has been sold and will be undergoing renovations.

Under business for the beer board, which is comprised of the members of Sparta Board of Mayor and Aldermen, Amy Lipinski, owner of 1 East Maple, a new restaurant, which will be opening later this month, applied for, and received an On and Off Premises Beer Permit. Lipinski stated she applied for an On and Off Permit so that she could participate in local festivals as well as serve beer within the new restaurant.

The beer board also recognized the Certificate of Compliance for a retail package store for Visnu Patel, Swami Management, Inc., doing business as Sparta Discount Liquors. According to Patel, the liquor store, which has been located at the corner of South Spring Street and Bockman Way, will be moving with the goal of opening in their new location on Oct. 1.

“We will be in the old Payless Pharmacy building, in the same shopping center as Floyd’s grocery store, but at the opposite end of the strip,” Patel said.

The board also approved a bid to replace four windows in the lower level of city hall as well as a floor renovation at the electric/public works facility.

There was also a unanimous decision to approve the creation of electric lineman pay scale making the wages competitive with surrounding areas in hopes to attract linemen. According to Mayor Jeff Young, for the period of approximately two years, the city has had a difficult time hiring linemen as they find the wages unsuitable and have been able to gain employment in other cities for a much better wage.

“Every time we would go through the process of attempting to hire someone, pay was always the issue,” Young said. “That prompted us to look into changing the pay scale.”

Before the meeting was adjourned, questions were asked about the placement of the train caboose the city had been gifted. It was stated the caboose was ready to be moved to its permanent location near the city cemetery, but public works department has been busy with other pressing matters and still has work planned for the building of a pavilion at South Carter Street Park and a garage for the police department that has to be completed before they can move the caboose.

As a final comment for the evening, the question of lighting at the gazebo located at the back of Liberty Square was also asked by alderman Dr. Chad Griffin. A decision to have the zoning board research the cost of putting lights in the gazebo was made.