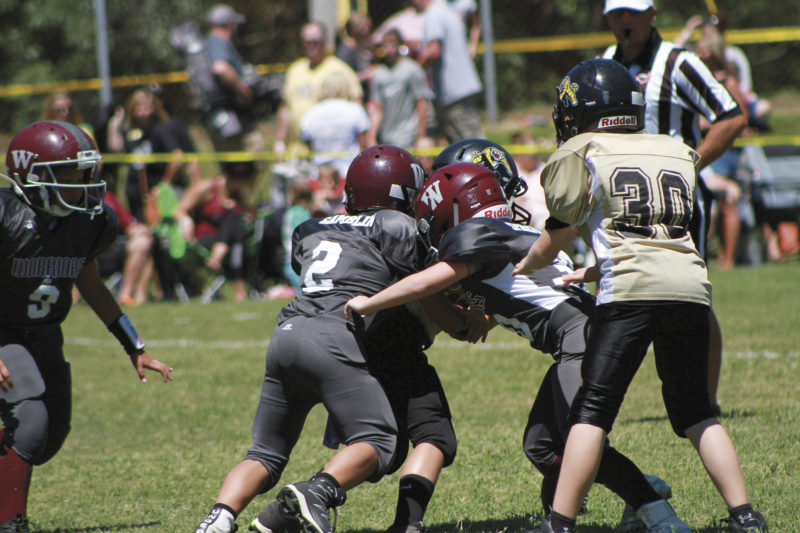 All three age divisions competed against DeKalb County in two 10- minute quarters. All three teams made significant efforts, with room for improvement in the weeks to come.

The senior division, which consists of 10-and-11-year-olds, won their contest 14-0 over DeKalb. Nate Mullins and Theo Brown each ran in for a touchdown. The Warriors’ defense was very stingy on the day, allowing minimal yardage to DeKalb. Asher Kelso, Devin Johnson, and Keaton Sparkman led the defense with several big tackles, shutting down DeKalb’s offensive. The 2017 Senior Warriors have a young team this year and will face some steep competition following their 2016 Division Championship and Superbowl win but seem up for the challenge in trying for a repeat.

The Junior Warriors had a stalemate at 0-0 for a finish. The Warriors finished with 80 yards rushing, led by Tucker Pinion and Kaiden Parker, but they were unable to punch it in the end zone for a score. The Warrior defense was only on the field for a short time because of the offenses rushing attack. However, when they were on the field, Eli Sparkman recovered a fumble caused by Hunter Broyles. The Junior Warriors, all 8-and-9-year-olds, will improve as the season progresses and show great promise for a successful season.

The Peewee Warriors have a large group of 6-and-7-year-olds this year. They also faced off against DeKalb County. They did lose 14-0 but still had a good showing. Griffin Adams and Hudson Dodd made a couple of big runs. Jose Cruz, Landon Kerr, and Reece Wallace made big defensive plays but couldn’t stop the Tigers.

The Warrior Youth Football season will get underway this weekend, with the first regular season game scheduled Aug. 12, at Stone Memorial High School, in Crossville. Peewees play at 9 a.m., with the Juniors at 11 a.m., and the Senior division will finish up the day at 1 p.m. The Warriors will face tough opposition but will be working hard in the coming weeks to continue improving. Please come out and support the youth Warriors.