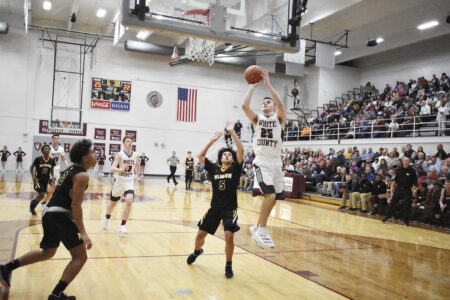 Mayson Winningham on a breakaway vs. McMinn County (Photos by JERRY LOWERY)

In the first game of the night, the Warriorettes faced a very good and very aggressive McMinn County team.  The Warriorettes found themselves down at halftime by six points, 27-33. 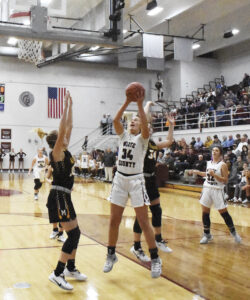 Julia Curtis going up for two vs. McMinn County

At the end of the third quarter, the Warriorettes cut the lead to only three, with McMinn County holding a slim three-point lead heading into the final frame.  The Warriorettes’ defense stepped up to the challenge issued by Coach Michael Dodgen and held McMinn to only nine points in the fourth quarter, while scoring 18 points.  The Warriorettes took the comeback win by a score of 60- 54.

Gracie Dodgen hit a milestone by scoring her 1,000th point in her career at White County High School.  Gracie Dodgen led the team with 30 points on the night.  Kendreah Reeves scored 10 points, and Julia Curtis scored eight points in the win.  Mia Murray scored four points.  Morgan Quick and Kanden Reeves added three points each, and Alaina Stiles added two points in the win.  The Warriorettes outrebounded McMinn by only three rebounds.  The Warriorettes shot 73 percent from the free-throw line.

The Warriors came out strong as well against a good McMinn County team.  The Warriors finished strong and defeated McMinn by a 90-67 score.

The second quarter saw the Warrior defense and offense turn up the intensity and held McMinn to only 10 points, while scoring 26 points.

The Warriors continued to keep the intensity going and finished the game by dominating the McMinn on both ends of the court. 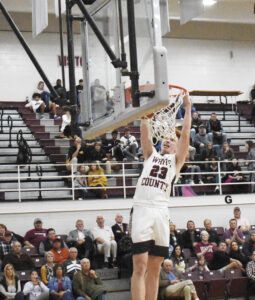 Grant Slatten with a breakaway Dunk vs. McMinn County

Grant Slatten had another big night offensively by scoring 36 points.  Masyn Winningham added 15 points, and Keagen Dodson added 14 points.  Austin Burchett and Kade Clark scored seven points each.  Tanner Paul and Micah Webster added five points each. Markeese Coleman scored two points, and Tucker Nash added one point in the win.  The Warriors outrebounded McMinn 30-26.  The Warriors shot 67 percent from the free-throw line.  The Warriors and Warriorettes move to 2-0 on the season.  The teams travel to Coffee County, on Nov. 25, before returning home, on Nov. 26, to take on DeKalb County.