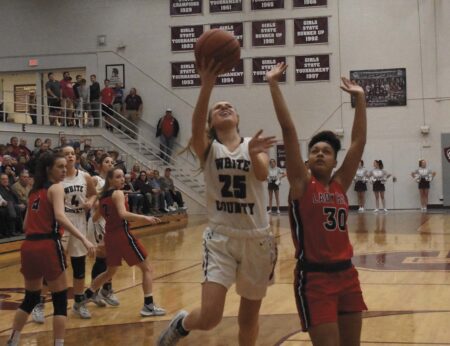 Alania Stiles for two vs. Cookeville

“Beat Cookeville” was the rally cry at Roy Sewell Gym, on Feb. 4, 2020, as the Warriors and Warriorettes played a big district game against rival Cookeville.

The Warriorettes took to the court first, and, in a thriller, defeated the Lady Cavaliers by a score of 61-57.

The Warriorettes were down at halftime as Cookeville took a four-point lead into the break. Coach Michael Dodgen made some adjustments, and the Warriorettes cut the lead to one at the end of the third quarter.

The Warriorettes outscored Cookeville 22-17 in the final frame to seal the win 61-57.

Gracie Dodgen led the Warriorettes with 20 points.  Julia Curtis scored 14 points.  Kendreah Reeves added 11 points, and Alaina Stiles added 10 points in the win.  Morgan Quick and Kanden Reeves scored three points each in the game.  The Warriorettes were 20 of 46 from the field for a 43 percent shooting percentage.  They hit seven of 21 three-point shots for a 33 percent average from beyond the arc.  They hit 14 of 25 free-throw shots for a 56 percent average from the stripe. The Warriorettes move to 3-3 in the district and 18-7 overall. 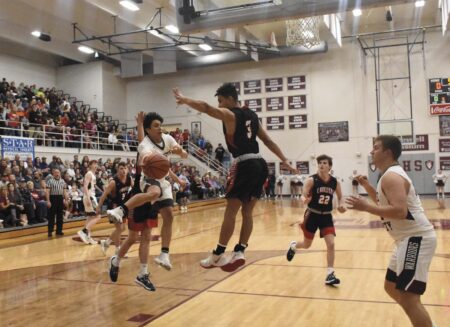 Kegan Dodson with a wrap around pass to an open Kade Clark for two vs. Cookeville

The Warriors beat Cookeville by a 76-57 margin. The Warriors outscored the Cavaliers in every quarter to win the game.

The Warriors remain in first place, with a 5-1 district record and a 19-6 overall record.  The Warriors and Warriorettes must now take the game on the road to finish district play for the next three games.  They play Cumberland County, on Friday nigh,t in Crossville and then must travel to Rhea County and Stone Memorial to end the regular season.