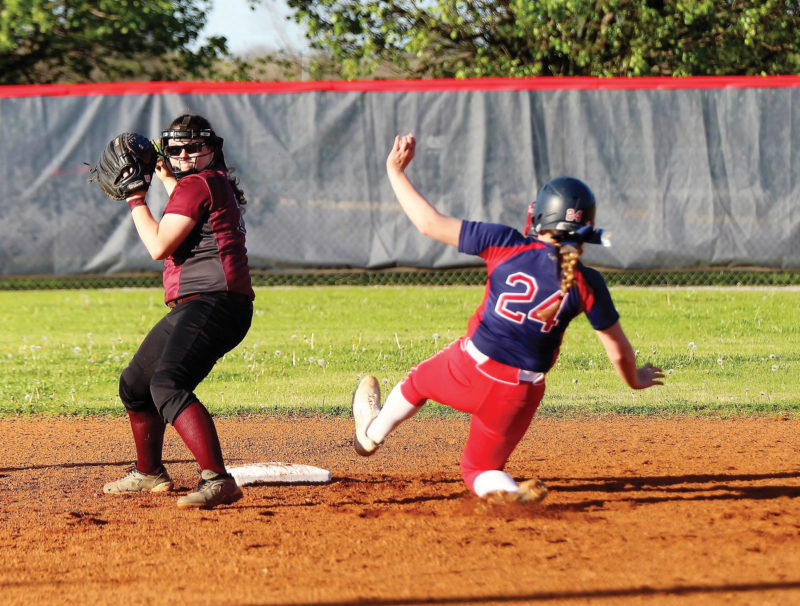 Macayla Rogan tags second and tries to turn the double play on April 4. Rogan finished the game with a double and a RBI. (Photo by UPPER CUMBERLAND REPORTER)

The White County High School Warriorettes fell behind early and couldn’t come back in a 6-3 loss to Cookeville, on April 4, at Cookeville High School.

The Warriorettes got their first run of the game in the top of the fifth inning. Megan Anderson got the inning going when she took a walk. Maggie Savage then grounded out to first base but moved Anderson to second. Macayla Rogan would then come up and double to center field to score Anderson and cut the Lady Cavs lead down to 6-1.

In the top of the seventh inning, the Warriorettes would make their final push getting two runs in the inning.

Savage led off the inning getting hit by a pitch. Rogan would then come up and get walked to put runners on first and second with nobody out. Gracie Villard would then come up to bat. On the second pitch of the at-bat, the ball would get away from the catcher and move the runners up to second and third. Villard would end up getting out for the first out of the inning. Deandra Luna would then come up and double to left field scoring courtesy runner Natalie Goodwin and Rogan to cut the Lady Cavs lead down to 6-3, but that is all the damage the Warriorettes would be able to do, as Cookeville held onto a 6-3 win over the Warriorettes.

Savage took the loss for the Warriorettes in the circle. She threw six innings, giving up six runs (five earned), seven hits, and striking out two.

Rogan, Luna, and Jessie Green each had a hit to lead the Warriorettes.