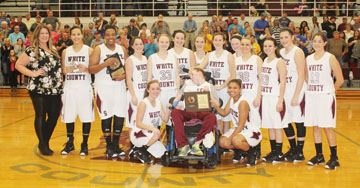 The Warriorettes became the first girls’ team to win back to back Sonic Shootout titles in the 8-year history of the event.

WCHS defeated Clarkrange 59-45 in Wednesday’s title game led by a trio of double figure scorers.  Hannah Leftwich finished with 18 followed by Deandra Luna with 12.  Madison Gardenhire recorded a double-double with 10 points and 14 rebounds and was named the Shootout’s Most Valuable Player.  Luna, Leftwich and Logan Quillen were named to the All Tournament team.

The win improves WCHS to 11-2 overall on the season.

The Warriorettes were honored to have teammate, Abby Ratliff, in attendance wearing her #14 jersey and helping accept the championship trophy of the 8th annual Sonic Shootout.