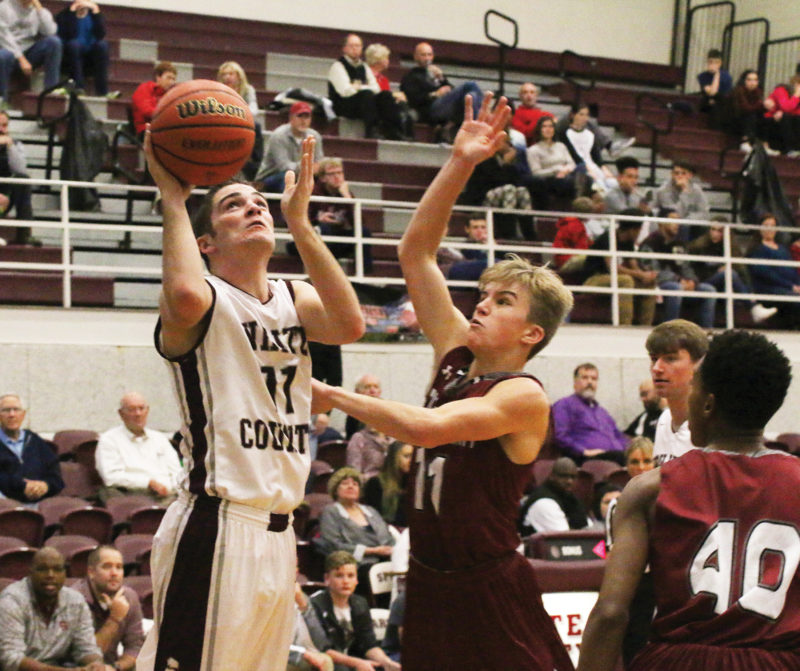 Hunter Copeland going up for two of his 14 points on Tuesday night. (Photos by ANDY SOUTHARD)

The Warriors and Warriorettes both got wins on Tuesday night in their first game of the Sonic Shootout.

In the boys’ game, the Warriors defeated the Tullahoma Wildcats 84-26. The Warriors would not only get the win, but Pierce Whited would score his 1,000-point as a Warrior.

In the girls’ game, the Warriorettes came away with a 78-62 victory over the Murfreesboro Central Magnet Lady Tigers.

In the boys’ game, the Warriors got the scoring started quickly. In the first 15 seconds of the game, the Warriors already had a 3-0 lead. Cole Crosland found Pierce Whited in the left corner for an open three to open up the game. Tullahoma would answer back with a three of their own. With 6:45 left to go in the first quarter, Pierce White did something that all high school players dream of when the start their careers – Whited hit the 1,000-point mark with a layup underneath the basket to get him to that mark and also give the Warriors a 5-3 lead.

Tullahoma would come down and answer back, but after that basket by Tullahoma, the Warriors would go on a 14-1 run. Jared Carter started the run by hitting back-to-back threes. Then Tullahoma would make one of its two free throws, but after they made their free throw, it would be Whited’s turn to hit two three’s on back-to-back possessions. Logan Swoape would cap off the run by making both two free throws after he was fouled.

In the second quarter, Warriors didn’t stop their scoring. With 4:00 to go in the quarter, Crosland found Malik Murray on the block. Murray caught the pass and went up for the shot and made the shot and got fouled. Murray would make his free throw to push the Warriors’ lead to 35-10.

To end the quarter, Crosland and Hunter Copeland would combine to score 13 points to give the Warriors a 48-18 lead heading into the break.

In the second half, the Warriors would outscore the visiting Wildcats 36-8 to give the Warriors a win by a final score of 84-26. All Warriors starters finished with double-digit points on the night. The Warriors were led in scoring by Whited, with 16 points. Jared Carter and Hunter Copeland each added 14 points apiece. Other scorers were: Cole Crosland (13), Logan Swoape (11), Malik Murray (6), Saylor Wilson (4), Thomas Dalton (2), and David Kinser (1).

At the end of the quarter, with 8.6 seconds left to go, Luna caught a pass in the corner and drilled an open three. On the inbounds pass, Luna then stole the pass from the Central Magnet girl and hit a layup to give the Warriorettes a 42-26 lead heading into halftime.

Luna led all scorers, with 26 points. She also added fourteen assists for her first double-double of the year. Leftwich and Bray also chipped in 20 points apiece. Brooke Stoglin added 5 points, and Jessie Green came away with 3. Kendreah Reaves and Megan Anderson each finished with 2 points apiece to round out the Warriorettes scoring.

male enhancement: where can i get viagra fast nugenix gnc tadalafil canadian pharmacy online natural methods to increase penis size one night ed pills can tresiba affect sex drive pills for ed or vacuum pump erectile dysfunction meds walmart watermelon pills for erectile dysfunction adult toys increase penis size penis wraping jelqing results ancient tribal penis enlargement sexual health clinic chester how to increase penis growth rate as a minor how bad is viagra for you what does it mean if a teenager has a low sex drive men dont need viagra if they do this once daily my boyfriend does steroids can it affect my high sex drive also penis extender dildo viagra tablet cutters ed information cheap generic viagra mexico does medicaid cover viagra 2015 how well does generic viagra work male enhancement girth pills cialis vs viagra vs kamagra trt hcg penis growth what todofor a bad reaction to viagra do you drink when you take viagra what is viagra in urdu low sex drive after stopped smoking