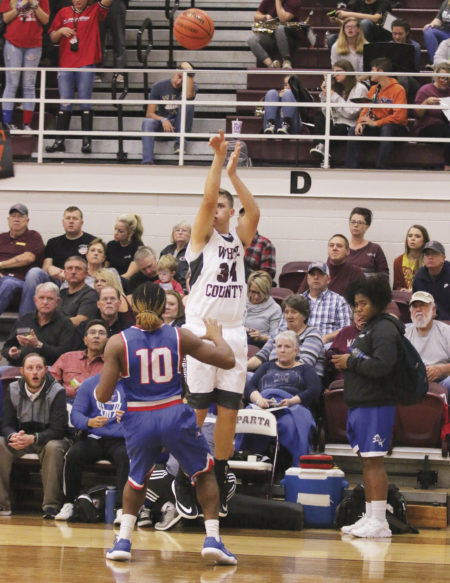 Four Warriors combined to score 59 of the Warriors’ 80 points, as White County High School overcame a very athletic Red Bank Lions team, on Friday night, to pick up the 80-57 win against the Lions, in Roy Sewell Gymnasium.

The Warriors came out in the second quarter and took control of the game with their three-point shooting. The Warriors would open the quarter knocking down four straight three-pointers and getting two   offensive putbacks from David Kinser to build a 31-17 lead, with 3:28 remaining in the half. Red Bank tried to cut into the lead with three straight points, but a 5-2 run to close out the quarter by Dyson Reece gave the Warriors a 36-22 lead heading into the locker room.

Red Bank got a layup to make it 48-33, but six straight points by the Warriors made it 56-33. Red Bank closed out the third quarter with a 7-4 run, but the Warriors led the Lions 60-40 heading into the final quarter of play.

In the fourth quarter, the Warriors opened the quarter on 17-7 run to put the game away and secure their sixth win of the year by a final score of 80-57.

The Warriors finished the game shooting 42 percent from the field. They were 17 of 35 from inside the arc and 12 of 34 from three. They were also 10 of 14 from the free throw line.

Red Bank finished the game shooting 29 percent from the field. They were 17 of 54 from two and three of 15 from behind the arc. They shot 14 of 24 from the charity stripe.

The Warriors held a 41-36 rebounding advantage and won the turnover battle 10-11.

With the win, the Warriors move to 6-1 on the season. The Warriors will return to action, on Tuesday night, when they travel to Tullahoma to take on the Wildcats. The Warriors picked up a 73-39 win over the Wildcats, on Nov. 19, at Roy Sewell Gymnasium.