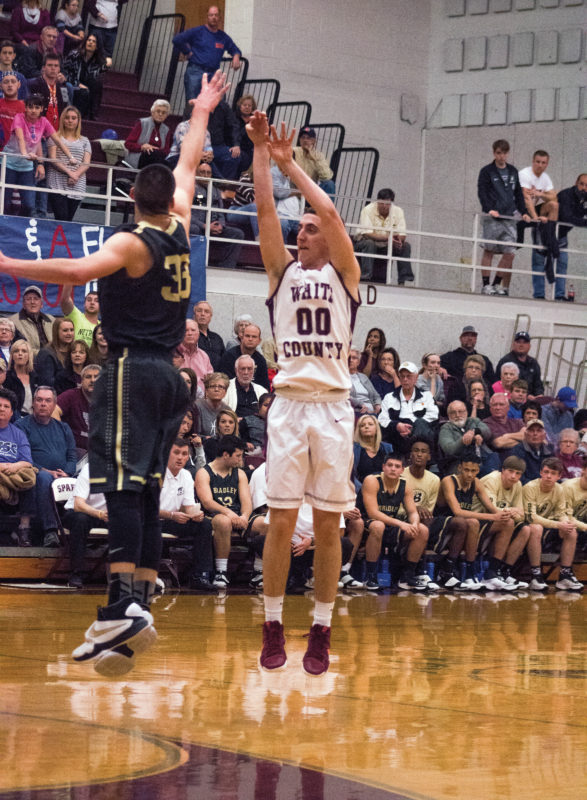 Jared Carter goes up for a 3 in the win over Bradley Central. Carter finished with 19 points. (Photo by ANDY SOUTHARD)

The win seemed to mean a lot to the Warriors because of the opponent they were facing. The Warriors faced off against a team that not only ended their perfect season last year but also end their season. The Bradley Central Bears came into Roy Sewell Gymnasium, on Saturday night, looking to pull the upset two years in a row. This year, though, the Warriors were able to pull out a 67-54 win using a big second half where the Warriors outscored the Bears 45-26.

In a game where there were two technical fouls and two flagrant fouls called all on Bradley Central, the Warriors kept their emotions intact and were able to walk out of Roy Sewell Gymnasium with the victory.

In the first quarter, on Saturday night, Bradley Central started the game off hot scoring the first 5 points to take an early 5-0 lead. But the Warriors tie the game up at 5 after a Jared Carter three, and then on the next possession he would hit make a layup, with 4:39 left in the first quarter.

Bradley Central would then go on a 9-2 run to take a 14-7 lead with the two points from the Warriors coming from Hunter Copeland. The Warriors would close out the first quarter on a 5-2 run to cut the lead to 16-12 heading into the second quarter.

In the third quarter, Bradley started the quarter off going one of two from the free throw line, and on the next Warrior possession that’s where everything got interesting. On the next Warriors’ possession, there was an intentional foul called and a technical foul called on a Bradley Central player that gave the Warriors four straight free throws.

Bradley Central would knock down a 3 on their next possession to go up by 3. On the Warriors next possession, though, there was another technical foul called on a Bradley Central player after he pushed down a Warrior player after the whistle had been blown. Carter would again step to the free throw line and knock down one of his two free throws, this time to make the score 32-30, with 5:54 remaining.

Bradley Central would steal the ball after the inbounds pass and take it in for 2. But the Warriors would close out the quarter on an 11-2 run. Thomas Dalton would get fouled and go the free throw line to shoot two free throws. He would make the first but miss the second one. On the miss, Murray would get the offensive rebound and pass it to Carter. Carter would drive to the basket and get fouled. He would make both of his free throws to cut the lead to 1. On the Warriors’ next possession of the quarter, Whited would find some open space on the right side of the court behind the 3-point line, and he would knock down a 3 to give the Warriors their first lead of the game at 36-34, with 1:44 remaining in the quarter.

In the final quarter of play, Bradley Central would get the scoring started by knocking down a layup to cut the Warriors lead to 3. Hunter Copeland would get the first basket of the fourth quarter for the Warriors on an underneath-the-basket shot to push the lead to 43-38.

With the win the Warriors move to 25-6 on the season and will look to make it to the Region Championship, on Tuesday night, with a win. The stats from that game were not available at press time.