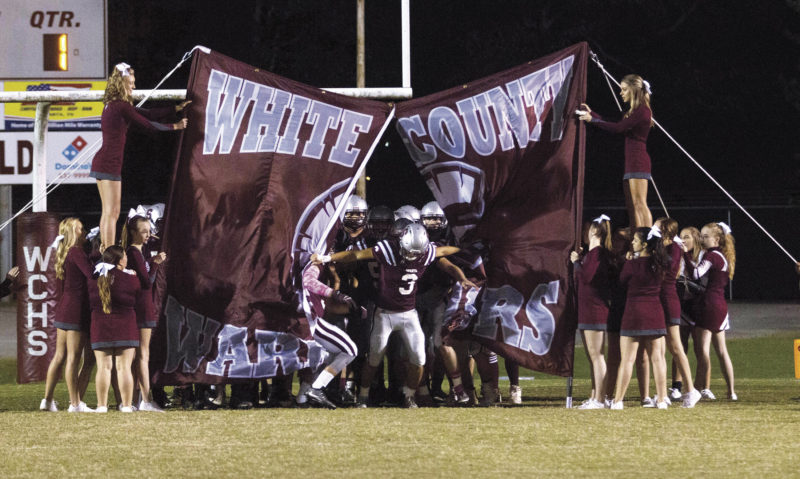 The WCHS Warriors break through the banner this past Friday night before their game with Page. (Photo by ANDY SOUTHARD)

This will be the first time the Warriors and the Falcons have ever met each other on the gridiron. This will also be a battle to see who can pick up their first region win of the season. The Falcons sit at 1-6 on the season and 0-3 in region play. The Falcons lone win this season came against Giles County. The Falcons picked up a 17-7 win over the Bobcats.

Lincoln County’s offense is set up similar to the Warriors’ spread option look. Lincoln County likes to run a two-quarterback system, though. Junior A.J. Alcorn is leading the Falcons in passing going 26-40 for 217 yards and two TDs. The other quarterback is freshman Neyland Jean who is 19-37 for 175 yards and 1 TD. Jean also has 58 carries for the season for 177 yards and a touchdown. The Falcons’ primary receiver this year has been Cade Cooper. Cooper has 18 receptions for 181 yards. The primary running back for the Falcons has been Rudy Cooper. Copper has 47 carries for 244 yards.

On Friday night, one team will walk off of the field with their first region win of the season. Kickoff is set for 7 p.m. in Fayetteville. For those who cannot make it to the game, check SpartaLive.com for updates.