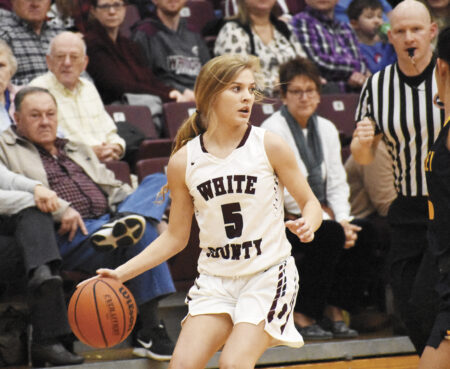 Caydra Parker looking over the defense vs. Walker Valley

The Warriorettes started the night off by beating Walker Valley 85-36.  The Warriorettes outscored the Mustangs in every quarter to take the dominating win.  They blistered the home nets for 15 three-point shots in the game.

The Warriorettes were 32 of 66 from the field for a 48 percent shooting percentage.  They shot 15 of 33 from beyond the arc for 45 percent.  They went six of seven from the free-throw stripe. 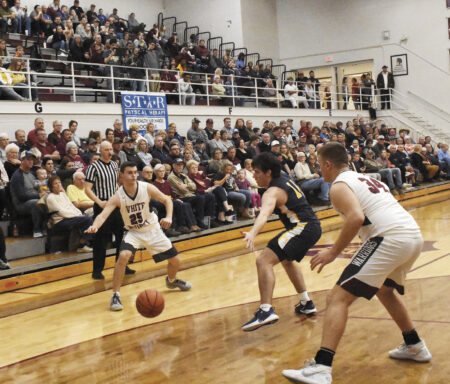 The Warriors took the court next with revenge on their minds.  The Walker Valley Mustangs beat the Warriors earlier in the year.

With a 26-point first quarter and strong defense, the Warriors took a 12-point lead after one quarter of play.  Walker Valley outscored the Warriors 25-17 in the third quarter to cut into the lead.  The Warrior defense stopped a Mustang comeback by holding them to nine points in the fourth quarter.  The final score was 76-65.

Five Warriors were in double figures in scoring on the night.  Grant Slatten scored 18 points, and Kade Clark scored 17 points.  Kegan Dodson and Masyn Winningham added 11 points.  Tanner Paul added 10 points.  Tucker Nash scored seven points, and Micah Webster added three in the win.  The Warriors shot 49 percent, hitting 30 of 61 shots from the field.  They hit eight of 21 from the three-point stripe for 38 percent.  The Warriors were nine of 14 from the free-throw stripe.  The Warriors and Warriorettes begin district play, on Jan. 14, and host Warren County.  Game time is set for 6 p.m.