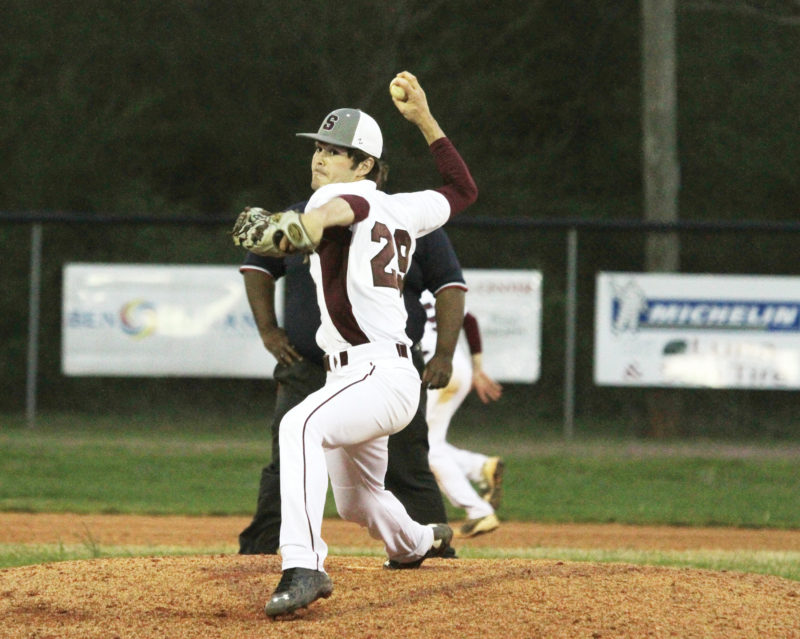 Trenton Hodges makes a pitch on March 30. Hodges threw five innings of relief for the Warriors. (Photo by BONNIE BRYANT)

The White County High School baseball team took on a pair of non-district opponents last week. On March 30, the Warriors took on Upperman High School in a game that took extra innings to decide. The Warriors were tied up at 10 with Upperman heading into the bottom of the 12th inning. David Smith came up with a big base hit to score Macon Girdley and give the Warriors the walk-off victory.

On March 30, it was a night of offense. The Warriors would finish the game with 14 hits, and Upperman had 11 hits in the high scoring affair.

Upperman got the scoring started in the second inning scoring one run to take the early 1-0 lead.

The Warriors would answer back, though in the bottom of the second when they scored three runs to take a 3-1 lead.

Holden Howard got the start for the Warriors. He went three innings, giving up six hits, four runs. He didn’t strike out anybody, but walked one.

Trenton Hodges was the next pitcher for the Warriors. He went five innings giving up one hit, two runs, struck out five and walked three batters.

Maverick Jennings earned the win for the Warriors. He threw a perfect 12th inning, striking out one batter.

Swoape, Mills, Maxwell, and Reece each managed two hits to lead the Warriors. Every Warrior that started the game finished with at least one hit.

In the March 31 game against Livingston Academy, the Warriors would suffer a heartbreaking loss, as they lost the lead late in a 4-3 defeat. The game was tied at 3 with Livingston Academy batting in the top of the sixth inning when Livingston hit a sacrifice fly to drive in a run.

Livingston took an early 2-0 lead on the Warriors. They scored runs in the top of the 2nd inning and top of the third inning.

The Warriors would get a run in the bottom of the third inning and then would take the lead on in the top of the fifth inning when Swoape would hit a sacrifice fly. Farris would score on the fly ball. The centerfielder would try to throw him out at home plate, but the throw was late. They would then try to throw Matt McCulley out at second base, but the throw would go into centerfield and get past the center fielder, and McCulley was able to come all the way around to give the Warriors the 3-2 lead.

Livingston Academy would answer back in the top of the sixth inning, with two runs of their own to take a 4-3 lead. The Warriors were never able to answer back and took the loss 4-3.

Young took the loss for the Warriors. He threw five and a third innings, surrendering four runs, seven hits, striking out five and walking one.

Hodges, Swoape, McDonald, Maxwell, McCulley and Smith each collected a hit to lead the Warriors.