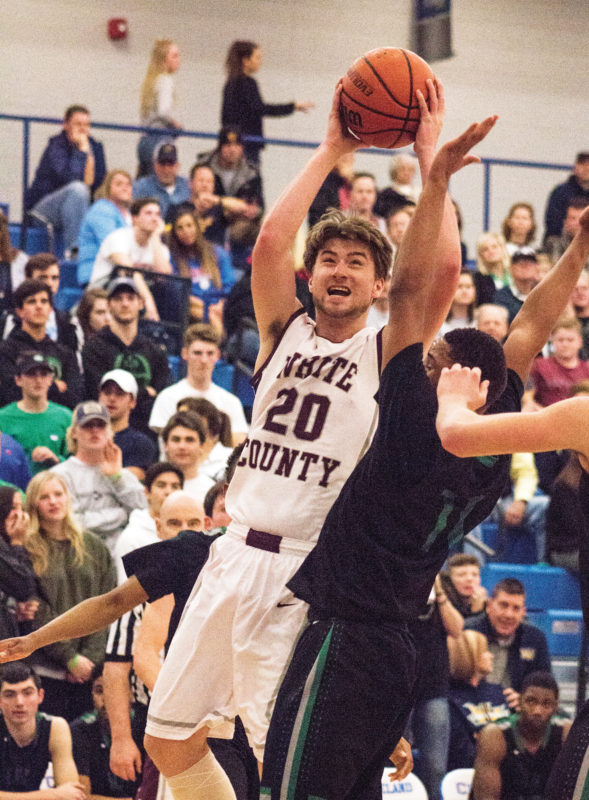 Pierce Whited goes up for a layup on Feb. 28 in a loss to East Hamilton. (Photo by ANDY SOUTHARD)

After watching The White County High School Warriors team of last year have a perfect regular season, win the 6AAA District Tournament, 6AAA Regular Season and break State 3- point records, many people came into the season not knowing what to expect out of this year Warriors team, because of the loss of four key contributors off of last year’s team.

The Warriors of 2016-17 would go on to surprise a lot of people when they won the District 6AAA tournament   championship and then beat the team that upset the Warriors from a year ago in Bradley Central. But this year’s Warriors team also ended their season one game away from a substate birth. The Warriors lost a heartbreaker to the East Hamilton Hurricanes 56-52 to end their season on Feb. 28.

Murray would give the Warriors the lead back when he hit a pair of free throws to put the Warriors up 44-42. East Hamilton would answer back going 3 of 4 from the free throws line to take the lead 45-42, and then they would get a layup to go up 47-44. The Warriors would get the lead down to 2 when Crosland would go one of two from the free-throw line to cut the Hurricanes lead to 47-45. East Hamilton would get a layup to extend their lead to 49-45.

But with 40 seconds left to go in the game and the Warriors down 52-48, Whited would step to the line for a pair of free throws. He would sink both of his free throws to put the Warriors down 52-50. Then on the ensuing inbounds pass, Logan Swoape would get a steal and make a pass to Crosland who would find Saylor Wilson cutting to the basket, and Wilson would make the layup to tie the game up at 52-52. But East Hamilton would make four free throws in the next 30 seconds and walk out with a hard fought 56-52 win.

With the loss, the Warriors finished the season with a 25-7 record. The Warriors will say goodbye to nine seniors: Pierce Whited, Cole Crosland, Jared Carter, Thomas Dalton, Malik Murray, Saylor Wilson, Logan Swoape, Hunter Copeland and Zack Lynn. This senior class has an overall record of 84-12 since joining the varsity team their sophomore season. They have been a part of two regular season district titles, two district tournament titles, one region tournament title, and one trip to the state tournament.

This Warrior team has gone through more adversity than any team should ever have to go through, but each time they did, they got back up and dusted themselves off and went right back to work. Though this team didn’t end their season where they ultimately wanted to, they never gave up and proved a lot of people wrong in the process.