WCHS Warriors hold on late to take down Cookeville Cavaliers 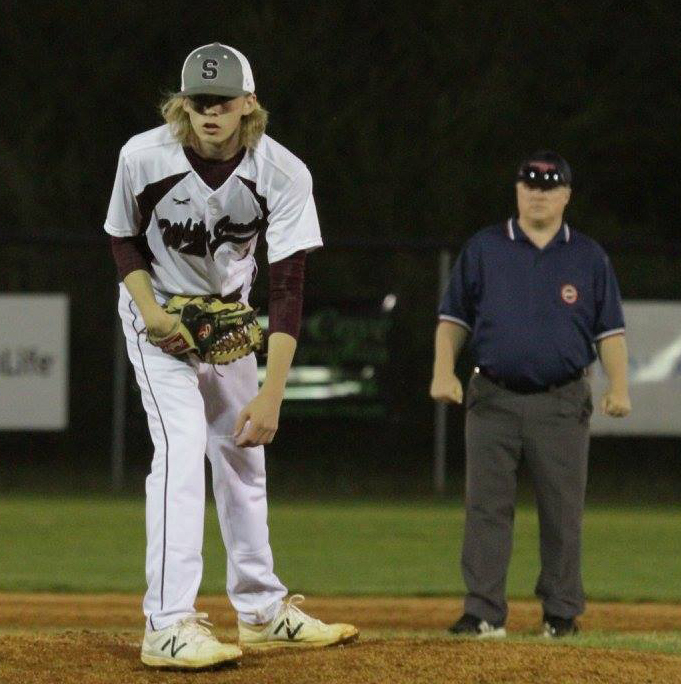 Maverick Jennings looks in for the sign during the April 4 game. Jennings came in and got the final out of the game for the Warriors and finished with the save. (Photo by BONNIE BRYANT)

The White County High School Warriors baseball team built a six-run lead in the second inning, on April 4, against the Cookeville Cavaliers at Ulysses S. Culley Field and held on for a 10-9 victory to even their record at 3-3 in District 6AAA.

The Cavaliers jumped out to an early 3-0 lead on the Warriors in the first inning of the game, thanks to some early miscues and timely hitting by the Cavaliers.

But the Warriors would answer back in the bottom of the second with nine runs to take a 9-3 lead.

Trenton Hodges led off the inning with a single on a line drive to left field. Eli McDonald then bunted into a fielder’s choice, the pitcher fielded the ball and couldn’t make an accurate throw to second base, and Hodge’s courtesy runner Will Griggs was safe on the play to put runners on first and second with nobody out. Hayden Farris would then come up and hit a ball to the Cookeville’s second baseman, and he wasn’t able to handle it, which loaded the bases with one out. Chris Mills would then come up and walk, bringing in the first Warrior run to cut the score to 3-1. Drew Young then hit a ground ball to third base that he couldn’t handle to give the Warriors their second run of the game and keep the bases loaded with one out. Logan Swoape then came up and singled to center field scoring Farris to tie the game up at three runs apiece. Jason Maxwell then came up and hit a two-run single to center field scoring Mills and Young to give the Warriors their first lead of the game at 5-3. David Smith would then single on a ground ball that got through on the left side of the infield that scored Swoape and put runners on first and second with one out. McDonald would then come up for the second time in the inning and single on a ground ball back up the middle and scored Maxwell from second base, and Smith would advance all the way from first to third base on the play, giving the Warriors the 7-3 lead. Dyson Reece would then come up and hit a ground ball to second base that the second baseman wasn’t able to handle to score Smith and move McDonald all the way to third base. Farris would then come up and single to right field scoring McDonald and giving the Warriors the 9-3 lead at the end of the second inning.

Cookeville would answer back with two runs of their own in the third inning to cut the Warriors lead to 9-5.

The Warriors would add an insurance run in the bottom of the fifth inning. Young got the inning going with a walk. Swoape would then get hit by a pitch to put runners on first and second with one out. Smith would then walk to load the bases with two outs. Hodges would then watch as a ball was thrown on a 3-2 pitch on the eighth pitch of the at-bat to walk in Young and give the Warriors a critical 10th run. The Warriors would lead 10-5 after five innings of play.

That run would end up being important, as Cookeville would make a comeback in the top of the seventh inning. The Cavaliers would score four runs in the top of the seventh inning to cut the Warriors’ lead down to 10-9 with two outs and the bases loaded. Maverick Jennings came in out of the bullpen and got the final out as he forced a Cookeville hitter to fly out to Mills in left field and give the Warriors the win by a final of 10-9.

Matt McCulley earned the win for the Warriors. He pitched three and two-thirds innings, giving up four runs, six hits, striking out four, and walking zero. Jennings recorded the last out to earn the save for the Warriors.

Macon Girdley started the game for the Warriors on the hill. He tossed three innings, surrendering five runs (four earned), six hits, and striking out two.

With the win, the Warriors move to 6-7 on the season and 3-3 in District 6AAA. The Warriors were scheduled to play on April 3, but because of rain that game has been moved to May 2.