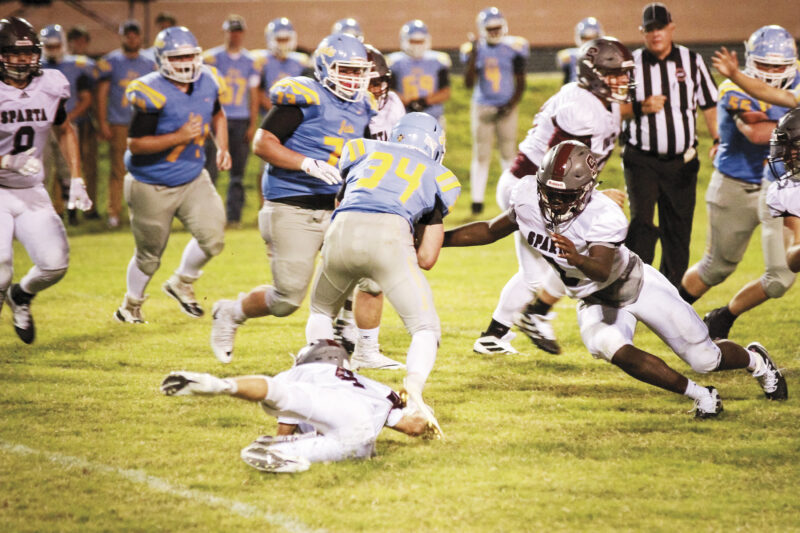 The White County High School Warriors traveled up the mountain to take on the Cumberland County Jets, on Aug. 30.  The Warriors extended their winning streak to two games as the horn sounded with a final score of 31-20 in favor of the Warriors. 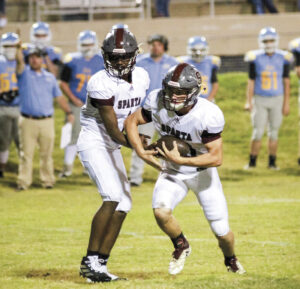 Noah Hamilton hand off to Will Griggs. (Photo by JULIA MORRIS)

The Jets deferred after winning the coin toss, and that gave the Warriors the first possession of the night.  After D.J. Paul gave the Warriors great field position with a solid kickoff return, the Warriors went on offense.  Sparta drove down the field behind the running of Will Griggs and Jayden Richmond.  The Warriors were faced with a fourth down and three in the drive.  Richmond took the ball and drove the ball over the first down stripe behind some strong blocks from the offensive line.  After two near missed interceptions, Will Cheek came on and centered the uprights on a 30-yard field goal that gave the Warriors the early advantage 3-0.  The Jets did not take long to answer the call as they drove down the field 80 yards to paydirt.  The extra point was missed, and, with 3:04 on the clock, the Jets took the lead 6-3 in the first quarter.  The Warriors once again started in great field position with another great return by Paul.  Sparta was forced to punt the ball back to the Jets.  Both teams settled in on defense and forced punts by the offense.  The score at the end of the first quarter was Cumberland County 6 and Sparta 3.

In the second quarter, Noah Hamilton came into the game at quarterback to lead the team.  And lead he did as Hamilton dropped back to pass and found Cheek on a deep post route.  Hamilton hit Cheek in stride for a 34-yard touchdown pass.  Cheek hit the extra point, and, with 4:24 on the clock in the second quarter, the Warriors took the lead 10-6.  The Jets started on the 20-yard line, and, on the third play of the series, the Jets’ quarterback Parsons scrambled down to the Warrior 10-yard line.  On the next play, Parsons found his way into the end zone, and, with the two-point conversion, the score at halftime saw Cumberland County up 14-10.

In the third quarter, the Jets were forced to punt as the Sparta defense stopped them on a three and out possession.  The offense started on the 39-yard line, and, some good running behind some strong blocking, the Warriors saw Richmond power his way into the end zone for the touchdown.  Cheek added the extra point, and the Warriors went back into the lead 17-14.

After the Warriors held on defense, Griggs weaved his way through the Jet defense and scrambled 28 yards for the second Warrior touchdown in the third quarter.  Once again, Cheek hit the extra point.  With 1:46 to play in the third quarter, Sparta leads 24-14.

In the fourth quarter of play, strong running by Richmond moved the chains, and, with 6:40 to play, Richmond broke free for 17 yards for a touchdown and with the extra point by Cheek, Sparta leads 31-14.  The Jets scored a late touchdown, with 1:18 to play to move close the gap, with a score of 31-20.  Sparta controlled the onside kick and ran the clock out.  The final score ended 31-20.

Stats for the game say Griggs ran the ball nine times for 82 yards.  Sydreck Leftwich ran five times for 31 yards. Hamilton ran three times for 14 yards.  Caleb Bailey ran two times for four yards, and Malachi Dowell carried on time for 12 yards.  Dustin Guy ran one time for 13 yards.  The total rushing yards were 248 yards.  Leftwich went 3 for 7 in passing for nine yards, Hamilton went 4 for 6 for 87 yards and one touchdown.  Passing yards totaled 96 for the game, and total offense was 344  yards.

The Jets had 222 yards on the ground, with Parsons getting 106 yards with three touchdowns.  The Jets passed for 86 yards and had a total offense of 308 yards.

“I felt like our kids came out flat in the first half, and our intensity picked up in the second half,” said Segraves.  “We executed well and Noah Hamilton came in and gave us the spark we needed with that big pass to Will Cheek.  Malaki Dowel came in and gave us a big boost.  Our backs continue to run hard and block for each other.  The OL continues to be the backbone of our offense. Coach Sloan and Coach Morris are doing a great job.  We have the kids to go from 4 wide to 2 tight if needed with only one substitution.  I am proud of their perseverance.  We must continue to improve each day.”

“We came out flat,” said Frasier. “We had a week of everyone patting us on the back and our intensity was not there.  After the half, we had some kids step up.  Sedryk Leftwich made a couple of TD saving tackles for us.  Markeese Coleman made several big plays, and, on offense, we began setting the tone physically.  When one of the Warrior players went down, you realize what is important and that is loving on these young men and teaching them how God cares for them.  Thankfully our player is OK.  It was a scary moment, but I think God uses things like that for all of us to learn.  We need to be thankful every day for what we have and tell people how much you care about them.  The team drew closer tonight in that moment.  We are thankful everyone is OK.”

The Warriors will now begin preparation for Christian Academy of Knoxville to visit Warrior Stadium next Friday night.