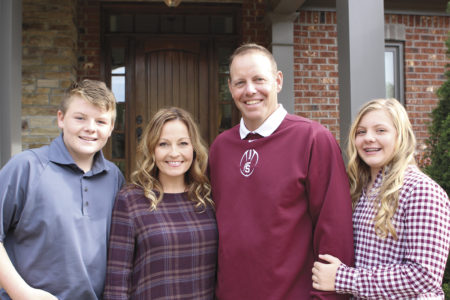 After almost a three-week process, White County High School has its 11th head coach in a 33-year span.

Principal Grant Swallows and Athletic Director Terry Crain made the offer for the position on Nov. 19, and Mark Frasier accepted. Frasier replaces Jerry Lowery who resigned his post in late October after three seasons at the helm of the WCHS football program.

Swallows talked about the hire of Frasier.

“We are excited to announce one of our own as the next head coach of the Warrior football program,” said Swallows. “Coach Frasier is a guy who has been successful throughout his life in several areas, including in coaching and the business world. If you talk to him even briefly, you can tell he is passionate about what he does. He communicated with us throughout the interview process how much he cares about the program he played in and wants to see it succeed. As the head coach of our middle school program, he and his staff did a fantastic job of creating a positive atmosphere for the young men who played for them. His vision, love for our community, passion for the program, and commitment to excellence is ultimately what makes him the man for the job.”

Frasier takes over the Warriors after having served the past season as the head coach at White County Middle School. Frasier took over the WCMS team that had gone winless in 2017, and, in his first season, guided them to a 5-4 record, garnering a spot in the CTC Bowl game.

Frasier started his coaching career, in 1998, at White County High School. He would help the team to a 4-6 record. After one season at WCHS, Frasier would head to Watkinsville, Georgia, at Oconee County High School. In his first season there as the defensive secondary coach, he helped the team to a 15-0 record and a AAA State Championship, in Georgia. In his second season as the defensive coordinator, the team would go 9-4, and, during his final season, they would finish the season with an 11-1 record. During his last two seasons, the team would win a region championship.

During his time in Georgia, his teams would win three consecutive region championships. He would also coach many student-athletes that went on to play college football. Six of those plays would go on to play at a major division I school. One of his players, Tony Taylor, would graduate from the University of Georgia and go on to play for the Atlanta Falcons.

After coaching in Georgia, Frasier would come back to White County and coach two seasons for Coach Malone and one season under Coach Houser.

Frasier, a 1992 graduate of White County High School, played all four years as a member of the Warrior football team. He would be named All-District and All Mid-State multiple times during his career. He was also named the WCHS team captain and team MVP.

After his four seasons at WCHS, Frasier would play one season at the University of Tennessee. He was coached by free safety coach, future NFL coach, and current Illinois coach Lovie Smith. After his one season at UTK, he transferred to Carson Newman University and played one season for Head Coach Ken Sparks, who is fifth all-time in collegiate wins. Frasier would later graduate from Tennessee Tech University with a degree in secondary education.

First, Frasier talked about what interested him in this job.

“The fact that this is my school and my hometown is the biggest reasons for me wanting to take this job,” he said. “There is no other football job I would take at this time. I want these players and this community to have something to be proud of, and I want them to be proud of this football team.”

In the past, Frasier has only been an assistant at the high school level.

“I’ve been lucky during my coaching career to coach under some very knowledgeable and successful head coaches,” he said. “I have learned different things from each of them. I will lean on those experiences going forward.”

Rebuilding a program is something that will not only involves the coaches but will also involve everyone. With the Warriors right now going through a rebuilding stage, Frasier talked about what it is going to take to rebuild this team.

“It’s going to take effort from everyone involved,” he said. “Obviously, coaches and players will have to dedicate themselves to being the best they can be. It will also take some help from the administration and the student body because with their support it will help so much. The community will also have to be involved in this rebuild as well. We all have to have a positive outlook on our team. We have to forget the past and expect to win. I feel confident as a group we can get this done.”

Frasier also talked about his philosophies as far as on the field.

“When I think about philosophies, I want our kids to play smart and be aggressive,” he said. “Our team has to learn to leave everything they have on the field. That will start in the weight room, then they will have to leave everything they have on the practice field, and then it will transfer to Friday nights. If we do that, I will never be disappointed in our kids.”

Frasier wrapped up his first interview by discussing his plans to get started with his team.

“We are going to start in the weight room,” he said. “We have to get stronger as a team. We have to get our numbers up also. Current players, students, parents, and the community all need to work together on getting every athlete in the school to play football again. We can also get kids from Van Buren County High School to play with us. We need to work like crazy to welcome those kids and convince them how much we need them. We also need to work on getting money to update our equipment and field house. If you’re going to be a high-class program you have to have high-class facilities. We need the community to help turn this thing around. It’s going to be an uphill climb, but I know we can do it if we all work together.”

The 2019 football season will be a fresh start for the program. Frasier will be taking the reins as the team ventures into a non-region schedule. The key now is for everyone to get on board and help White County football return to a place of respect. It will take everyone involved to achieve that. Frasier will begin the first phase when he starts working out with his team, on Nov. 26. The journey begins then.