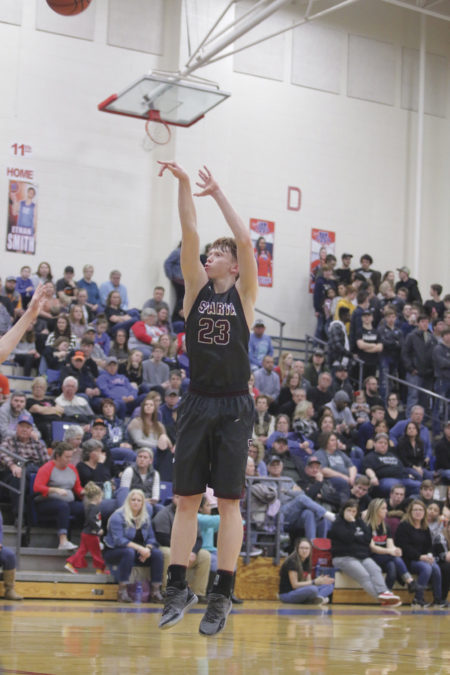 Grant Slatten knocks down a three in Friday night’s game. Slatten led the Warriors with 23 points against Warren County.

The White County High School Warriors had to come from behind, on Friday night, to pick up their 21st win of the season.

By the time, the end of the third quarter rolled around, the Warriors had cut the Pioneer lead to one and went on to take the 76-71 win, improving to 5-3 in District 6AAA and 21-7 overall.

In the second quarter, both teams hit a three to open the quarter, then a layup by Slatten gave the Warriors the lead at 19-17, with six minutes remaining in the half. However, seven straight points by the Pioneers gave them a 24-19 lead. After both teams got a basket, a Clark three cut the lead to two at 24-26. A 5-2 run by the Pioneers pushed their edge to 31-26, but the Warriors closed out the half on an 8-5 run. However, they trailed at the half 36-34.

In the fourth quarter, the Warriors opened up the quarter on a 10-4 run to take a 63-59 lead. However, the Pioneers didn’t go away, as they answered with a 7-2 run of their own to retake a 66-65 lead, with 4:05 remaining. Clark gave the Warriors the lead back after getting an offensive rebound putback and was fouled on the play. He knocked down the free throw, and Slatten followed that up with a pair of free throws of his own to give the Warriors a 70-66 lead. Austin Burchett also hit a free throw to push the lead to five, but a Warren County three cut the lead back down to two, with 1:11 remaining in the game. However, the Warriors closed out the game, going 5-8 from the free throw line to pick up the 76-71 win.

The Pioneers held a rebounding advantage of 27-23 and won the turnover battle 14-9.