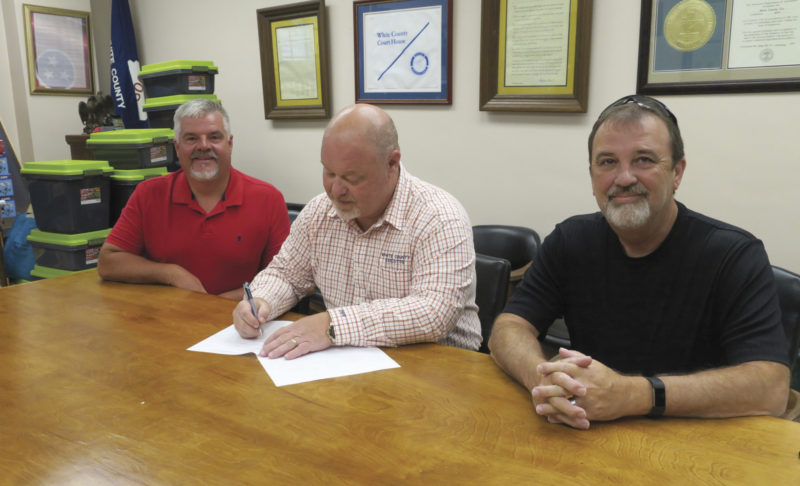 Denny Wayne Robinson signs a letter of intent, on July 20, 2018, for White County to send its solid waste to the Just Be Green Energy facility, in Van Buren County, where certain components of the solid waste will be heated up to make diesel fuel. L-R: Chuck Burgess, of Just Be Green; Denny Wayne Robinson, White County executive; and Greg Wilson, Van Buren County mayor. (Photo by RIMA AUSTIN)

Imagine a town, much like Sparta, having virtually no garbage – a town where 95 percent of what is thrown in the landfill is collected and turned into diesel fuel.

In a little over one year, imagining this will not be necessary because it will be a reality.

For a year and a half, White County Executive Denny Wayne Robinson, the Solid Waste Committee, and Van Buren County Executive Greg Wilson have been working with Just Be Green Energy), LLC Upper Cumberland Waste to Fuel, to initiate a program of collecting solid waste from counties around Van Buren and hauling it to a dumping station where certain components of the solid waste will be heated up in order to make diesel fuel.

“Back in the early 2000s, incineration was a very bad process,” said Chuck Burgess, co-owner of JBGE and engineering consultant to both White and Van Buren counties. “This is not incineration. When I say we heat the waste, we heat it to about 1,700 degrees Celsius. There is no flame. There is no fire. This process has no emissions and is a completely closed process.”

Burgess explained that by heating the waste to that temperature it emits a gas. That gas is then captured much like the distillation process of alcohol. It is then condensed and that is what the fuel is made of.

The new facility will be built in Van Buren County and is expected to open at the end of 2019. Burgess stated that it is up to the individual counties as to what they would like taken to the new facility. The only items that they can use for the fuel process include plastics, paper, and tires. Some counties may choose to keep their metals and glass to recycle themselves, or they have the option to send those components as well, and JBGE will recycle it for them.

Robinson said that just by taking the tires alone is a big deal. Wilson spoke up and said that he and Robinson have been working very closely on this deal for over a year and attributed a lot of the credit to Robinson.

“To say anything about Denny Wayne not doing anything is totally false,” says Wilson. “This man has worked tirelessly for White County.”

When the operation is in full swing, it is expected that White County will lose at least 95 percent of its solid waste to recycling.

Wilson said, “I don’t know of any process anyone else can do that can get anywhere close to the recycling that this has the potential for.”