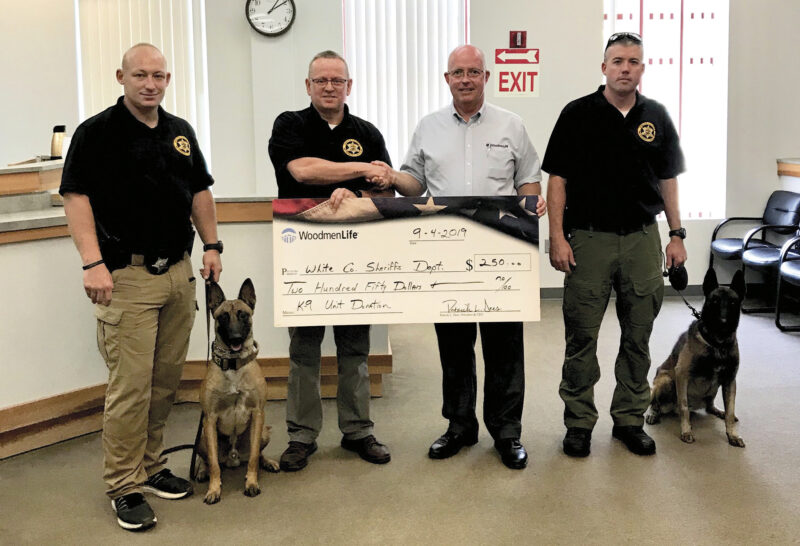 White County Sheriff Steve Page (second from left) accepts a donation from Tim Bumbalough (third from left), of WoodmenLife, for the sheriff department’s K-9 Unit. Also pictured are members of the unit.

WoodmenLife, which was originally known as Woodmen of the World, and  founded in 1890 as a not-for-profit fraternal life insurance company, has a long history of supporting not just their members but the communities in which their members live. According to Tim Bumbalough, financial representative, Sparta chapter, which was founded in 1977, has made contributions that include flags for schools, fire departments, and police departments as well as providing flag poles to many not-for-profit organizations. They have also participated in backpack programs and food drives and have supported the school systems in White and Van Buren counties through donations of books, scholarships, history awards, and teacher appreciation meals.

“Being a WoodmenLife member means more than just having insurance with a company, it’s a part of who I am, it’s part of serving our communities,” Bumbalough explained. “So when I saw the article in the newspaper a few weeks ago and it mentioned the dogs are actually owned by the deputies that handle them and the expense of the education, I knew it was something our local chapter would want to help with.”

Bumbalough said he mentioned the idea at the next business meeting and was not surprised when everyone wanted to help with the donation. According to Bumbalough, the Woodmen company provides a $25,000 benefit if a member is killed while performing his or her duties as a first responder including the duties of volunteer firefighters.

“We hold all our military, law enforcement, and first responders in high regard,” Bumbalough explained. “As a community, we will never be able to give them the support they deserve. Each day we see our first responders, let’s tell them how much we appreciate their service.”