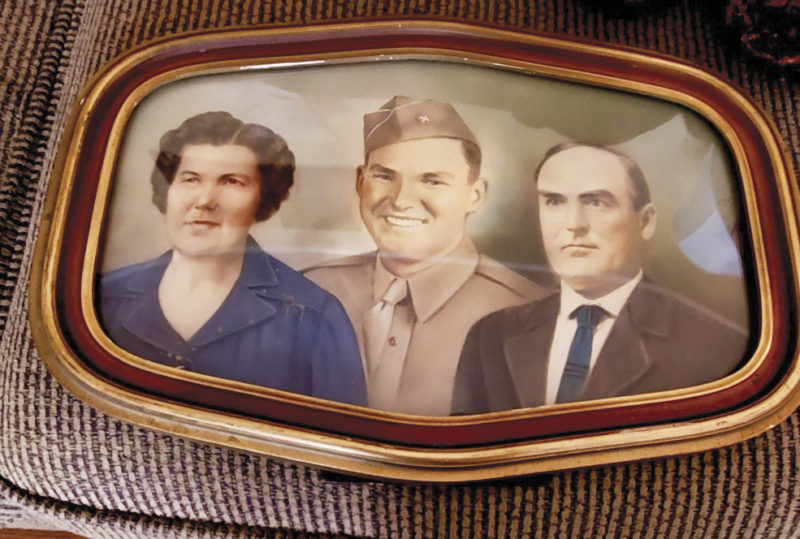 Ceicel Bradley, who died during World War II while serving his country, is shown in this old photograph with his parents. Bradley’s name is among several listed on the back of a Victory Flag that was recently found. Regina Wilhite, who found the flag stored in her parents’ home, visited Martha Lee, a family friend, to share the news about the discovery of the flag. When Lee was told about Bradley’s name being on the list, Lee quickly produced the photograph, telling Wilhite that Bradley was related to her late husband. 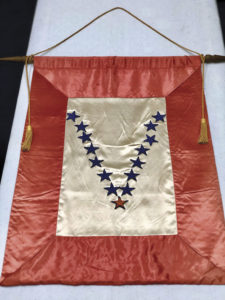 A lone gold star on the Victory Flag represents the loss of a family member during war time. Ceicel Bradley’s gold star was laid on top of the original blue star, which is seen in the bottom of the v-shape.

Regina Wilhite found a historic treasure when cleaning out the rooms at her parent’s home. A flag from World War II that had once hung in a community church was among the antiques, family photos, and other memorabilia.

“This flag originally hung in the Mt. Carmel United Methodist Church, but we are pretty sure it was representative of the whole community, not just the one church,” Wilhite said.

Wilhite was referring to the 15 blue stars that were sown to the banner-like flag in a V-formation when she spoke of the flag being a representation.

“When I found the flag, I noticed that there was something on the back,” she said. When I looked, it was a very old paper that was beginning to crumble. The paper had what looked like a list of names.”

Fourteen names to be exact – each name belonging to a man in the community who had gone to serve his country in World War II.

“We are fairly certain that it was a flag for the community,” Wilhite said again. “Some of the men listed attended other churches in the Macedonia community. We have no way of knowing if there were other flags in those churches or just this one. But it would be interesting to find out if anyone else has one of these flags or has seen one.” 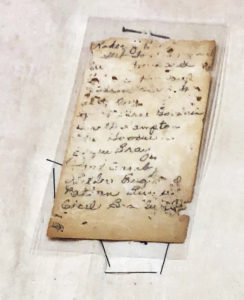 Ceicel Bradley’s name, along with several other men who served in World War II, are listed on a tattered piece of paper attached to the back of the flag.

Wilhite said the flag came to be in her possession through a fortunate series of events. Years ago, the church made the decision to renovate their basement to create more classrooms. According to Wilhite, the boxes of things that were being stored there were taken to her grandparents’ house as they had always been very active in the congregation. Later, her parents inherited the belongings and hung the flag in an upstairs room in their home.

“I have been going through some of the old things in my parents’ home and making some donations to the Tennessee State Museum,” she said. “I happened to show a curator at the state museum a picture of the flag, and she immediately knew that it was a war-time banner and that it was significant.”

Wilhite said once she knew the flag was related to World War II, she immediately knew she needed to call Sandy Cash Witt, curator at the White County Veteran’s Museum.

“There is an extra star at the bottom of the V, but that star is gold,” Wilhite said. “We think that star is for Mr. Bradley. There is a star next to his name on the list. After checking records, we found that he was killed overseas, and we think that is why the different star.”

The term “gold star” describes a family member who has lost a loved one in military service. The gold star first made an appearance during World War I after being placed over a service flag’s blue star when a service member was killed in combat.

On June 6, which is the anniversary of D-Day, when veterans stormed the beaches of Normandy during World War II, Wilhite donated the flag to the White County Veteran’s Museum.

“I wanted to donate the flag to the museum,” she said. “It needs to be where people can see it.”

Witt accepted the flag on the behalf of the museum but hopes they can learn more about it.

“We don’t know who made it or exactly when during the war it was made,” Witt said. “We think that the V-shape was probably to signify Victory, but we don’t really know. We don’t know if there are other flags out there or if other communities had similar items in their churches.”

Witt said she would encourage anyone who has any information about this flag, or any like it, to contact her at the museum by calling (931) 836-3595.

“We would also like to have a picture of each of the men listed on this flag,” Witt said. “A picture in uniform would be ideal, but we would be happy to take any picture someone might want to donate or make a copy of for us.”

Witt said the plan will be to hang the flag in the museum and surround it with pictures of the men it was made to represent.

“This is such a great thing,” Wilhite said. “I’m glad we learned how significant it was and were able to give it to the museum so that the history of our men and this community won’t be lost.”