Haidar Zaidan, Kaitie Shipley are selected as Man, Woman of the Year 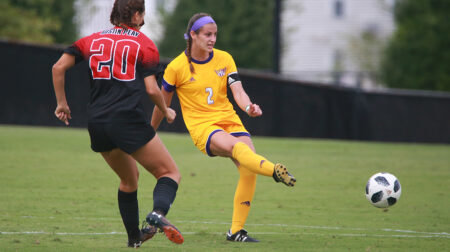 Kaitie Shipley
All-Time Golden Wings Award Winners
By Mike Lehman, TTU Sports Information Tennessee Tech Athletics wrapped up its recognition of the best and brightest of its more than 300 student-athletes by releasing the final two winners of its 2020 Golden Wings Awards. On Friday, the two highest honors bestowed by Tech Athletics were announced. Haidar Zaidan of the football team was named Man of the Year, an award that was born in 1993 and has seen 26 winners. The Woman of the Year honor, the department's longest-standing honor, was established in 1991 in conjunction with the NCAA Woman of the Year honor. Joining 31 previous winners of the honor as soccer's Kaitie Shipley. To be eligible for each award, a student-athlete must be a senior or graduate student who has completed her athletic eligibility during 2019-20. Criteria for selecting the award include both athletic and academic accomplishments, as well as additional areas such as community and campus involvement and public service activities. 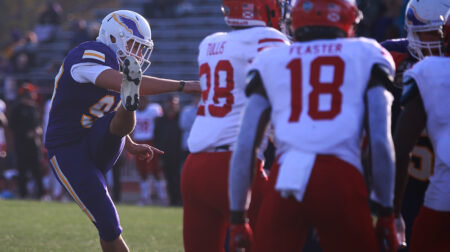 Haidar Zaidan
A senior and the team's starting placekicker, Zaidan showed a healthy mix of all of the criteria that make up the Man of Year Award winner. After spending the brunt of his career handling just kickoff duties, the Dearborn, Mich. native made his lone season as the feature kicker count. Known for his big leg, Zaidan finished the year 12-for-16 on field-goal attempts, including three longer than 50 yards. He drilled a career-long 54-yarder on the year, tying for the second-longest field goal in program history. The two-time OVC Specialist of the Week and Phil Steele All-OVC Third Team honoree was also a perfect 22-for-22 on point-after tries, finishing the year with 58 total points. On track to earn his degree in biology with a concentration in cellular and molecular biology in May, Zaidan compiled a 3.51 GPA through the fall semester and has been named to the Athletic Director's Honor Roll in six of his seven semesters at Tech. He was also a two-time member of the Ohio Valley Conference Commissioner's Honor Roll. In January, he began a research project testing different strains of antibiotic-resistant bacteria against different antibiotics recording their resistance. In addition to balancing the load of student-athlete, he was also a member of the Chemical Medical Club on campus, as well as the TTU RAM Club. As a member of the football team, Zaidan helped accumulate over 100 hours of volunteer work in the community, assisting organizations such as Habitat for Humanity, Harrington for Hope, Mustard Seed Ranch and the Vietnam Veterans Traveling Memorial. Zaidan was also chosen to be a part of the football team's leadership group, consisting of 10 individuals chosen by head coach Dewayne Alexander to resolve issues, lead by example and properly represent the program at all times. With the honor, Zaidan became the 16th member of the Golden Eagle football team to earn Tech's Man of the Year Award and second in-a-row after Josh Poplar took the honor last year. One of the most decorated members of the soccer team in program history, senior Kaitie Shipley was an easy choice as the Golden Eagles' Woman of the Year, constantly serving as a shining example of what Tennessee Tech student-athletes should aspire to. A starting defender in each of the past two seasons, she never left the soccer pitch, playing every minute while earning All-OVC First Team honors both seasons as a team captain. Named Team MVP in 2018, Shipley followed up her junior campaign with another stellar season, scoring two goals while anchoring a Tech defensive unit that finished in the top-five in the OVC in goals allowed and goals-against average during league play. As talented as the Barrie, Ontario native was on the pitch, she was even more eye-popping the classroom, accumulating a perfect, 4.0 GPA while staying on track to graduate in May with her degree in exercise science/physical wellness with a concentration in fitness and wellness and a minor in science. She has earned Athletic Director's Honor Roll honors each of her seven semesters, OVC Commissioner's Honor Roll accolades each of her three years and the OVC's Medal of Honor three times. Last year, Shipley was awarded the OVC Scholar-Athlete Award, the most prestigious individual honor presented by the conference to a student-athlete. She has twice been selected as a member of the Google Cloud Academic All-District Team and was honored with the Exercise Science Department's Horizon Award and Challenger Physical Education Award. A member of the Student-Athlete Advisory Committee, she also served as one of only 15 Tennessee Tech students on the TTU Advisory Council for Education. Additionally, Shipley was a member of the EXPW Majors Club and served as a tutor for Tech Athletics. She accounted for countless hours of volunteer activities in the local community, including assisting with the Next Step Mission, Cookeville Shelter, Cookeville Rescue Mission, and the Putnam County tornado cleanup efforts, just to name a few. Shipley represented the seventh member of the Golden Eagle soccer team to be named Woman of the Year, and the fourth in the past six years, joining the likes of Lauren Brewer (2018), Taylor Blazei (2016) and Katie Phillips (2015).