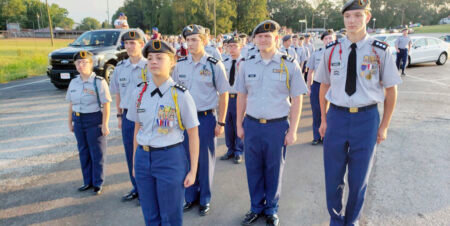 “Keep the dream, always,” Kiya Simmons, battalion commander for the Warrior Battalion and the captain of the White County High School JROTC exhibition team, claimed as her personal mantra as the COVID-19 pandemic is changing the course of her senior year.

Simmons, who has been in JROTC for her entire high school career, is a member of the drill team and has participated in Honor Guard at WCHS football and basketball games, but the accomplishment she may be most proud of is helping to begin the JROTC Exhibition Team.

“I began the exhibition team from nothing my sophomore year with research dedication,” she explained. “I missed out on my last drill competition due to COVID-19.” 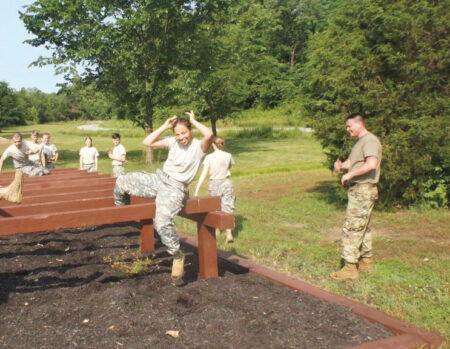 Simmons said she has so much love and pride for the team, and, while she knows there will always be one piece missing from the legacy she leaves behind, she has hopes for the future of the program.

“Although it’s sad that I do not get to leave my program getting to compete on the team I created, I am glad to see that I have cadets who are smart and driven enough to carry on my team,” she said.

Simmons said she first joined JROTC after being forced out of her comfort zone during freshman orientation where a former cadet made her hold a rifle, which sparked her interest. She said JROTC has changed her life.

“There was a time I was a shy kid, but JROTC really helped me learn who I am, from developing leadership skills to making me more self-confident,” she said. “Getting to be part of WCHS JROTC program has taught me that there’s a place for everyone at WCHS.” 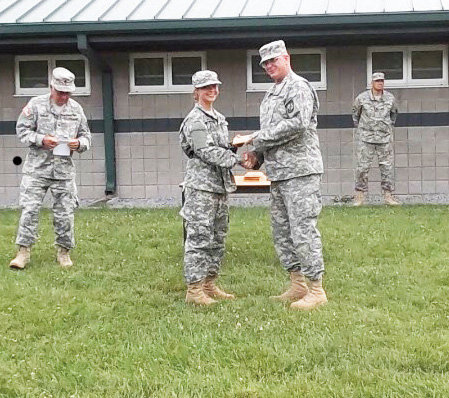 “My favorite memory comes from our summer camp, JCLC,” Simmons said. “Guys from other schools kept trying to talk to me, and a sergeant caught on and made them do push-ups in the middle of the adventure course. This was one of the funniest things I have ever seen.”

She reminisced about a time earlier this year when she had a slip with a knife trying to cut a tag and accidentally stabbed herself in the face.

“The next day, I had to go into JROTC with three stitches and take the jokes from the whole battalion,” Simmons said.

Simmons knows she wouldn’t have those memories if she hadn’t had some help along the way. 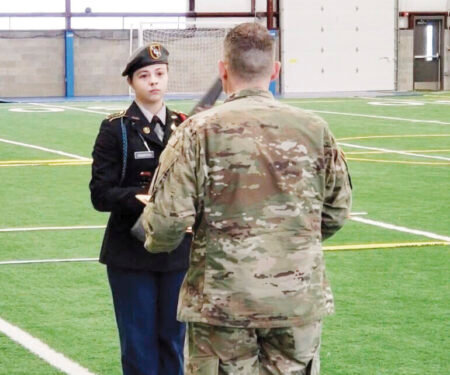 “I want to thank my family for being there for me through thick and thin, but especially my mom and stepdad, and Shine,” she said. “Shine always helped me any time I needed money for a school event. My stepdad had to take me everywhere for the past four years, and my mom has sacrificed so much to ensure I have a good life filled with opportunities.

“I want to thank both Sgt. Major Tim West and Maj. Thomas McIntyre for helping develop my leadership skills and never giving me up on me,” she said.

Simmons knows the guidance she received from her mentors has already impacted her future and the direction her life will be going when she leaves White County High School. That future includes plans to attend UT Martin starting in the fall and a double major in criminal justice and psychology.

“I also will take part in their ROTC program and become a Skyhawk Cadet,” Simmons said. “After college, and some time in my career field, I plan to join the world of politics and begin running for office.”

While she knows her time with the WCHS JROTC may not be ending as she had hoped and while she understands her hopes for a final awards ceremony are fading as each day passes, Simmons also knows the experiences, the life changes, and the memories will not disappoint or fade.

“To my fellow cadets, no matter what happens, know that the past four years I have spent getting to know you all will be with me for the rest of my life,” she said as a final message for the people she feels she has grown with, people who can always count on her to support them – whatever paths they may all take from here. “I believe in all of you, and I can’t wait to see all the great things you do.”

“Remember to ‘shoot for the moon and you may land amongst the stars.’ Never give up,” Simmons said. “If you want something, don’t sit back and make excuses: make a plan, make some goals, and then go grab your dream.”

Simmons’s parting words for her team, her battalion, and her cadets were to encourage them to keep their own dreams – whatever they may be.

“Stay strong and never give up, cadets.”