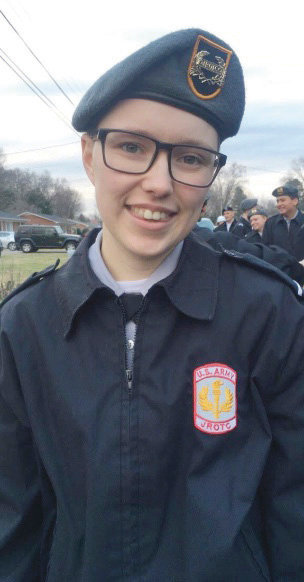 “It doesn’t matter how old you are, remember to step out of your comfort zone and try new things,” White County High School senior Lily Jordan said.

Jordan indicated she had lived by those words as her motto when she decided to add JROTC to her repertoire of activities during her final year at White County High School.

Jordan already had a list of activities that would look impressive on a college application before she joined the JROTC program and, ultimately, the drill team. She has been a constant on the swim team all four years of her tenure at WCHS as well as a member of the Spotlight Theater Club during both her middle school and high school years. She also participated in the Work Based Learning program offered to seniors in good standing at WCHS.

“Each of these activities has taught me something different,” she said. “However, I think the biggest thing they all have in common, and I know it’s cliché, would be that they taught me to never give up.” 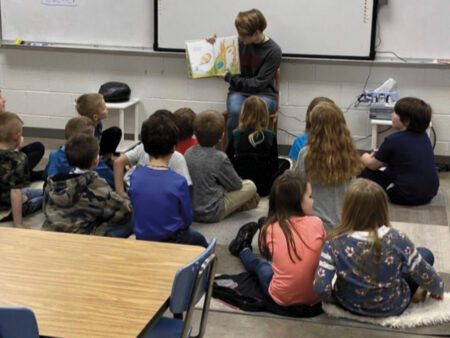 Lily Jordan reading to a class during Work Based Learning

One of the most rewarding things that the lesson of perseverance rewarded Jordan with had to do with her time on the swim team.

“When diving, I used to belly flop at many swim meets,” she laughed. “It took me until my senior year to improve. I had to work really hard to get to where I ended up.”

But that hard work came along with great memories to take with her as she leaves the halls of her school two months too soon.

“I really enjoyed being able to ride in the swim van with my teammates to the meets, and I especially enjoyed attending and swimming relays in the all-day region meet in Nashville,” she said. “We were able to finish our season and have our banquet. I didn’t realize how thankful I would be to get to experience the end of my senior year [as a member of the swim team] until COVID-19 forced schools to close.”

Jordan wasn’t so fortunate with the rest of the items on that list of sports and activities included on her college application, however.

“I have met many new people, but most of all I was able to meet SGM Tim West and Maj. Thomas McIntyre,” she said. “I wish I could have had the opportunity to get to know both of them better or at least finish my senior year in the program.”

Jordan was able to participate in the team’s fall drill competition but missed out on the spring competition in Warren County due to its cancellation regarding COVID-19. She also missed out on her Military Ball, adventure day field trip, and awards banquet ceremony.

“As of right now, I do not know if any of that can be rescheduled,” she said solemnly.

While she is still missing out on so much with the final quarter of the 2019-2020 school year being forced to become a virtual learning experience for all White County students due to the COVID-19 crisis, Jordan is still walking away with a lot of great memories. Memories like opening night of the 2019 spring musical, Bye Bye Birdie, when nerves were up, and she and her fellow castmates were all so excited for all of their hard work to pay off.  Memories like getting to read to the second and third grade students at Woodland Park Elementary during her Work Based Learning block. Memories of playing dodge ball and tag with her “students” and seeing the look of excitement they had. Memories like preparing for this year’s theater production of Seussical with the very talented WCHS cast that she said deserved to be showcased. Memories of her grandmother telling her to “swim away from the alligator” before every swim meet.

One of Jordan’s favorite memories may have come from her new activity.

“The first time I did an Honor Guard it was so exciting,” she said, talking about performing at a basketball game with some of her closest friends. “It meant so much to me that my friends and SGM Tim West believed in me. They told me I could do it and took the time to help me learn how to present the colors properly.”

Before Jordan moves on the next chapter in her very busy life – a chapter that will have her continuing classes at Motlow State Community College, where she has already been participating in classes through the high school’s dual enrollment program, as she goes after her high aspirations to major in psychology and becoming a clinical psychologist with the same enthusiasm as she has shown in all of her high school endeavors – Jordan wanted to be sure to thank the people that have kept her on course.

“It has taught me to always try my best and to never give up,” Jordan said. “Like in life, you will win sometimes, and you will lose sometimes.”

And, while she, along with so many of her 2020 senior classmates, has lost so much, Jordan knows the experiences, lessons, and memories she gained means that, overall, her high school career was one big win.