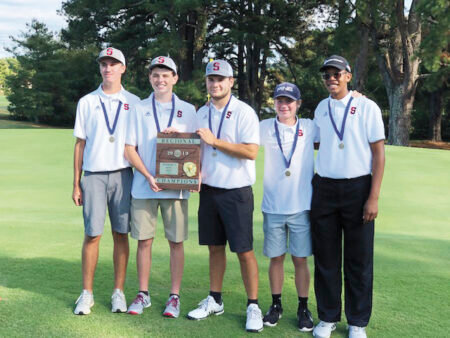 “Even if things aren’t looking your way, never give up until it is over,” Tyson Welch, a dual-sport senior athlete at White County High School, said.

Welch also said sports have plenty of lessons that are as relevant off the athletic field as they are on it, but he just didn’t realize those lessons would be quite so significant before he ever crossed the stage as a White County graduate.

Welch is among what will become the infamous Class of 2020 who definitely didn’t have things “looking their way.” However, as sports have taught him, he and his classmates at White County High School are not giving up, and they are finishing out their final days in unconventional ways so they can let this simply be a chapter in their lives. Welch said he and his classmates still have so much to look forward to.

While he claims that golf, a game he began playing as a sixth grader, is his true love, Welch has also been a member of the Warrior soccer team for the past three years.

“My friends convinced me to play soccer because it was fun, and I found that I really liked it,” he admitted, and added that he had played youth soccer when he was younger as well. “I played wing in soccer.”

Soccer wasn’t the only game Welch played when he was younger. Before high school, he played baseball and basketball as well.

In fact, one of his favorite memories comes from the city courts, not the high school fields.

“I received the Pistol Award for sportsmanship,” he said, and recalled that  was a moment that will forever stand out on the highlight film of memories.

One such memory contains all of the above.

“On the way to my eighth grade middle school district golf tournament, Coach Martin Lee said he would jump in the pond if we won,” Welch said. “We did win, and he did jump in the pond at McMinnville Country Club -  and hurt his foot!”

Discipline, honesty, and leadership are three lessons Welch said sports, and particularly golf, have taught him - three lessons that he will take with him as he leaves his days of being a Warrior athlete behind and joins the ranks of students who will attend Vol State in the fall as he begins his quest for a degree in business administration.

Welch also knows he hasn’t gotten to the part in his life where he can begin planning for his post-academic future on his own. He gives much of the credit to his family.

“I want to thank most of all my parents for encouraging me and supporting me in everything I did,” he said.

Welch knows his family was always supported his athletic endeavors. Just like the lessons he has learned, he knows their love and support carries off the field as well.

“They were there at every match they could be at – every game they could attend,” he said. “They are my biggest fans.”

Welch added, “I also want to thank my coaches for their encouragement and their support along my high school journey.”

He added that while the journey has come to an end, it did so in the grandest of styles.

“My senior year, my golf team made it to the state tournament,” he said. “We placed second in district and won the region to make it to state.”

Soccer’s final season came in its own defining moment -  a moment that reminded him that just because things aren’t always looking his way, it doesn’t mean there wasn’t something good in it.